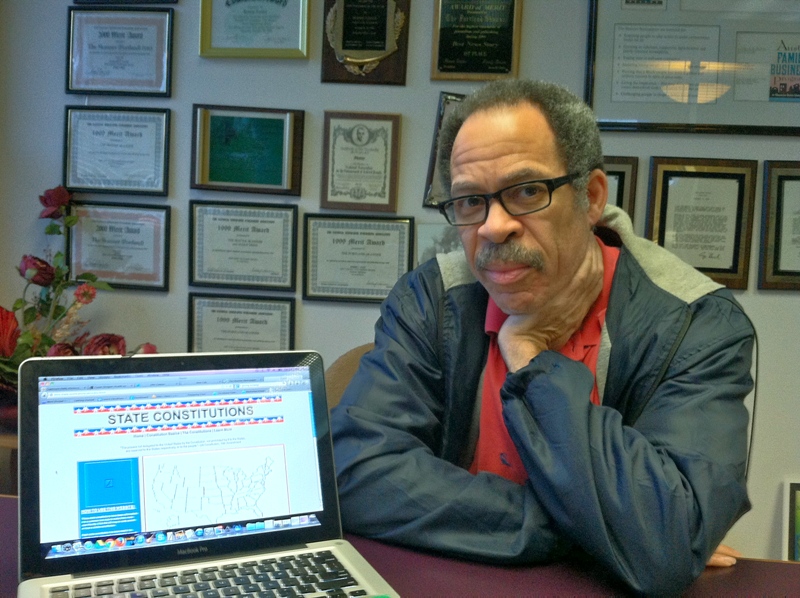 There are millions of websites out there with gazillions of political points of view fighting for voters’ attention every day of the week.

But how many of them are actually useful tools for understanding your own political environment -- whether you’re a Democrat, Republican, Green or Libertarian?

Don Merrill of Oregon City just launched a website for everyday people to dig deep into state Constitutions, using e-book-inspired audio uploads, breaking news updates and more – and he hopes that people from coast to coast will use it to become active in making their state the best it can be.

Along the way his work offers fascinating insight into each state’s “personality,” and a deeper understanding of the different roles played by state and federal governments in our daily lives.

Originally from Ohio, Merrill is a retired soldier; a former federal government public affairs specialist; a radio, video and print journalist; and now self-employed media expert with experience across many platforms.

The Skanner News sat down with him to talk about his stunning new website, http://www.stateconstitutions.us, and why state constitutions are key factors shaping our everyday lives.

The Skanner News: What inspired you to build this web resource?

Don Merrill: I wanted people to have more access to their state government. I wanted them to have more access to the founding documents of their state, the Constitutions. I’ve just been really disappointed in the way the federal government has been behaving. Whether we’re talking about court decisions, whether we’re talking about our president who either didn’t follow the good advice he had to got bad advice; to our legislators who can’t seem to legislate, let alone cooperate, let alone communicate.

And so I started thinking, well there must be another way that people can get access to their government. Fortunately we have a Federalist system so there are levels – federal, state and municipal -- and the level that I think affects most people on the day to day level is the state. So I thought everyone puts so much emphasis on the federal constitution, but as I did this project I realized that the federal constitution, when it was created it really was meant to give just the most basic of protections, it’s at the states where the day to day work of governing our lives takes place, but people don’t really pay attention to the state constitution.

And so I thought that if they had more access to it, they would access it more. Because these people – when legislators make a decision they don’t go someplace else when they’re done; they live here. So we have more effect on them, as opposed to the federal legislators who go through a Dr Jekyll and Mr. Hyde thing when they get elected and they go away.

TSN: Where there any surprises for you?

Merrill: I learned that Alabama has the longest constitution on Earth. I turned all of these Constitutions into audio files, so they could be downloaded as an audio book. So people could listen to them. It’s really a long process, I could tell you but it’s really long.

The Alabama constitution is longer than India’s and when I turned it into an audio file it was 44 hours long.

Another thing I learned was, almost every state’s constitution begins with a promise to its people, and that promise is called a preamble. Almost every state has a preamble; our state has a preamble. Preambles are promises that the founding fathers made to the people who are going to live in that state of what they promise to do on behalf of the state and what they plan to do on behalf of the people who live in that state.

So you can see through the preambles, states have very different characters and personalities. I try to address a lot of things on this website to have people become familiar not just with the constitutions but for people to get familiar with the personalities of the states those constitutions govern.

TSN: You’ve got a lot more going on here than it seems. You have audiofiles of the constitutions as well as written copies; you also have a news feed.

So, just to take that one example, if someone wanted to investigate issues of race and racial language in the Oregon constitution, they could just come over here and start searching around.

TSN: What do you want people to do with it?
Merrill: I want people to become more aware one, of the effect government has on them, and two, the effect they can have on government. I don’t think people can do that as easily at the federal level as they can at the state level.

TSN: What are you working on next?
Merrill: This has got me thinking about the federal government, and I’m thinking that I might want to at some point start working on a look at the efficiency and efficacy of federal agencies. I look at the way they operate and I’m not sure – for instance the whole public comment process. I worked for a federal agency for 12 years and I was in the military for 12 years, so I have a lot of experience with the federal government. The way the federal government deals with the public is really, really interesting. I’m not sure the agencies operate in the bests interests of the public. And because I have the experience that I have, I think there are some ways I might be able to bring to the table, some kind of book or something.

For more information go to www.stateconstitutions.us.