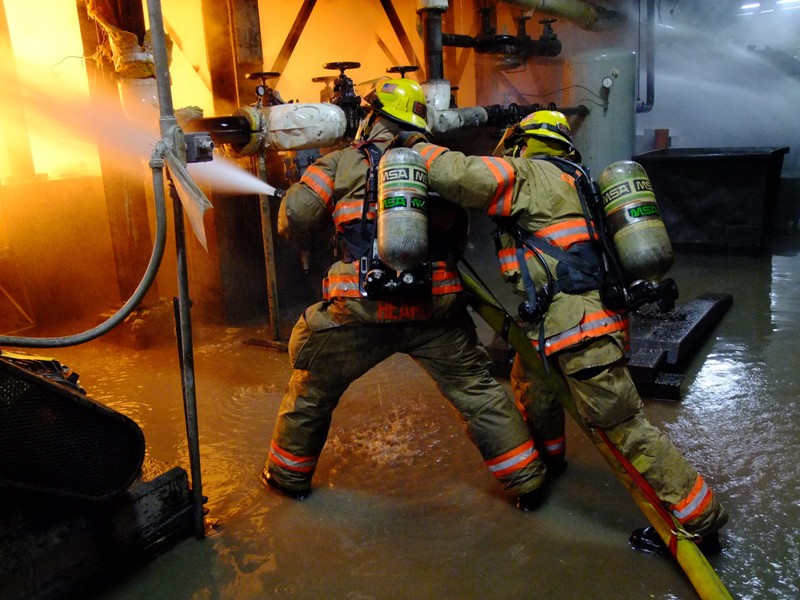 Budget cuts to the Portland Fire Bureau are drawing their own kind of fire, as the city’s firefighter union is protesting budget cuts – and the resulting city budget surplus.

The union says now that Mayor Charlie Hales has followed up his calls for cuts with an announcement that the City has more than $8 million in reserves, the City should add money back to the firefighters to offset 50 percent staff reductions to Fire Station 2 in Parkrose and Station 8 in Kenton.

Even more shockingly were news reports this summer of cutbacks that were so bad that fire trucks were called to the scene of blazes – but trucks are not equipped with water sources, so, firefighter say, these trucks had to call bigger fire engines in from other jurisdictions.

The firefighters union says their other big concern is what may happen in next year’s budget if people are not aware of the public danger posed by this year’s cuts.

The Skanner News spoke with Alan Ferschweiler, the president of Portland Firefighters Association, about what the union sees as misinformation on how the cuts are affecting the public and efforts to force the city to give North and Northeast neighborhoods their full firefighting staffs again.

The Skanner News: Sir we have read that there are fewer fires in Portland and therefore we don’t need as many firefighters. What’s really going on here?

Alan Ferschweiler: There is a two-pronged issue.

The first, and I would say the major of the two issues, is the staffing.

What we traditionally had in the Kenton fire station and in Parkrose, we had eight people on, per duty per day, every day, 365 days a year. They were staffed on two separate vehicles, on an engine company that carries water, and one is a truck company that carries ladders and does rescue, vehicle extrication.

So with the budget implementation the biggest thing that happened is, Northeast and North Portland went down from eight people a day to four people a day. And there was no additional resource given to those communities.

And so the situation is now that if we have a fire on HaydenIsland or MLK, essentially we do not have the number of engines and trucks that we would have had before the budget, to fight those emergencies.

And one of the things that happens is a lot of the times City Hall focuses on the number of fires that we have. It’s completely inaccurate; the number of fires that we’ve gone on have not gone down. We average about 2,000 fires a year, we’ve averaged that for the past five years. But because we’re gone on an extra 20,000 medical calls in the past ten or fifteen years, the percentage has gone down. And so in actuality the number of fires we’ve gone on per day is the exact amount that we were going on five years ago. We’re just going on a lot more medical calls than we ever have.

And I think what this means to families is that, when you have a house fire, they don’t have two rigs anymore. That means you’re not going to have a separate crew that does a search and rescue of your family, and another crew to put the fire out. You’re going to have one crew now to do both of those.

TSN: Commissioner Dan Saltzman told media earlier this year that new equipment was coming to the Fire Bureau and that would improve the situation. Did it?

AF: The new vehicles are in place and there have been multiple times when those vehicles have not been adequate – running out of ladders, running out of hose, being out of service because they need repairs.

What they’re not talking about, going back to the staffing, is the surrounding fire stations – and I’ll use Kenton as an example – the response into Kenton by other fire stations has increased dramatically. We have to have Station 19 from Killingsworth come into Kenton more often. We have to have Station 26, which is on Lombard, come into Station 8 area more often. And what that means is increased response times; by taking away two companies in that station area that they serve, then they have to pull those resources from even farther away.

That means when you have a fire it’s getting bigger, when you have a heart attack it means somebody is not there to help you. When you need CPR help is that much further out than it was before the budget.

TSN: What is a better way to do it? What do you want to see happen?

AF: We know that the budget’s been stabilized for the City of Portland, we know there are communities that have been impacted – and I will say Parkrose and Kenton are two communities that have been impacted directly. They are feeling the effects of a budget cut when there is now a budget surplus? I think it’s time to re-evaluate putting those services right back in there. Because we do have a budget that is stabilized and moving in the other direction.

I feel like in terms of fire protection and emergency response, Kenton and Parkrose have shouldered a large portion of the budget cuts at the fire bureau and now that everything is stabilized, it’s those communities chance – and they should have this right —of being safe again, and to start getting those resources to protect the safety of people in those communities.

TSN: Are you guys quantifying how much damage has already been done? I mean, since July, how many times has a crew been called out to a place where there isn’t enough water? Has anyone died or has anyone’s house burned down that wouldn’t have?

AF: I think that a lot of it is we haven’t lost any lives so far on the budget cuts but of course one is too many. Unfortunately if you have a budget cut and then things happen and then unfortunately the community starts to accept that as the norm. So instead of having a fire truck in Kenton in four minutes, people are waiting six minutes for the Killingsworth fire station to come over, and that becomes acceptable to have someone who’s having chest pains to wait an extra two minutes when everybody knows that every minute that goes by damages the heart; every minute in a stroke damages the brain.

Find out more about the Portland Firefighters Association Local 43 at www.portlandfirefighters.org .