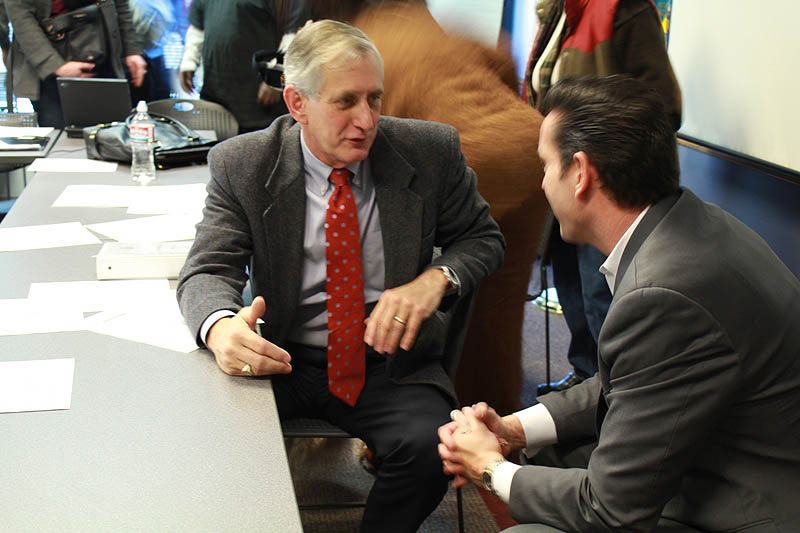 Mayor Charlie Hales brought a video to Portland’s gang task force meeting Friday morning, with a strong message about violence from New Orleans Mayor Mitch Landrieu. Hales heard the speech in September at the US Conference of Mayors, he said, and wanted to share it with Portlanders.

“Mitch Landrieu is a mayor like me who is passionate about this issue, so I hope you all feel affirmation for what you’re doing and commitment to what we have to do from listening to Mayor Landrieu. He’s somebody who I will be relying on as a partner and an inspiring brother in this work.”

“Last year in New Orleans 193 of our fellow citizens were murdered –193 tragic stories of wake and destruction and heartache,” he said.  “The common thread? Nearly all the victims were young African American men who were killed by young African American men between the ages of 16 and 30. In 88 percent of the cases, they knew each other. And in almost all of the cases they were unemployed, had dropped out of school and society too.”

Landrieu said New Orleans has created a plan called NOLA for Life, to tackle violence in a holistic way. As well as strengthening the city’s homicide and gang units, the city raised $1 million to increase prevention services.

“We know that prevention and helping our families succeed is the name of the game,” Landrieu said. “We’ve doubled the number of summer jobs for youth and created new job training and placement opportunities through partnerships with local businesses and universities.  We’ve launched midnight basketball to interrupt violence and to connect young men with resources they need.”

As well as viewing the video, the gang task force reviewed recent events in Portland. To date Portland has seen 98 incidents of gang-related violence this year, said Officer Russ Corno. But although numbers are lower than in 2012, this week has seen 25 injuries, he said, some serious.

Two funerals were held this week: for Precious Jackson, 24, who was shot and killed Nov. 1 at Southeast Powell and 124th, and for Durieul Harris, 30, who was shot Nov. 9 outside the Fontaine Bleau nightclub on Northeast Broadway.

So far, despite the presence of numerous witnesses, nobody has been named a suspect in Harris’ death. Hales said it was important that the OLCC moved to shut down the club immediately.

Hales said it was important that the OLCC moved to shut down the club immediately.

Hales is taking advice on whether to recommend that the club could reopen with restrictions, such as an 11 pm closing and security measures.

It’s an arena where Black men and women can more easily reach out to gang-affected youth, he said. “Gangs were originally around because dudes were trying to help other dudes in this community,” he pointed out.

Multnomah County Community Justice manager, Kate Desmond said she was working to strengthen partnerships with the Department of Corrections.

“When our gang violence statistics started to go down, we started to lose our outreach workers,” he said. “Now we’ve got them back and we can never go there again.”

Jenny Glass from the Rosewood Initiative on SE Stark an 162nd and  said employment services are underway at the center twice a week. Boys and Girls Clubs are opening a new youth center on 165th and Stark, she said, which will make a huge contribution to prevention services for youth in Rockwood.

Abdul'Hafeedh bin Abdullah said ex-offenders who have learned from their experiences and want to prevent further violence should be offered  training and support to do outreach work.

“They are an untapped resource,” he said.