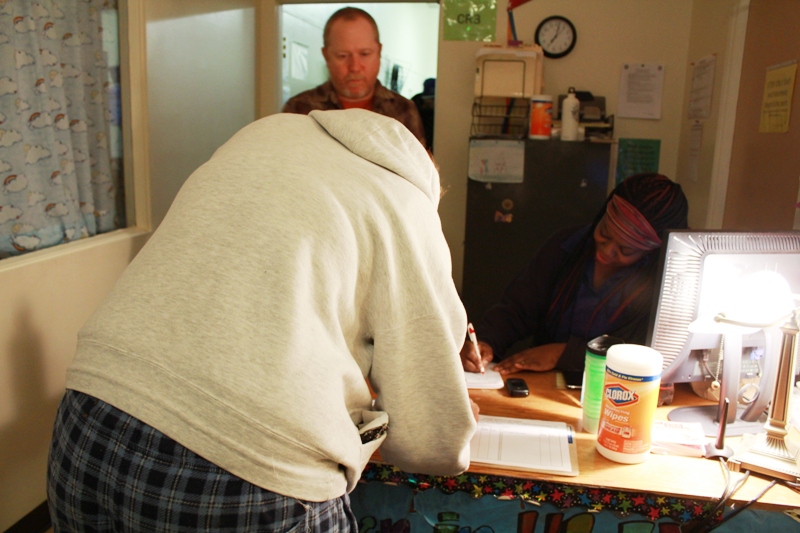 The Time to Listen -- Time to Act campaign started with breakfast at 7 a.m. at Sisters of the Road , 133 NW 6th Ave., followed by visits to organizations that support homeless people. Then the group headed to Pioneer Square for an interfaith convocation starting at 8:30 am. The group wants to draw attention to the rise in homelessness and seeks increased funding for housing efforts.

The Family Night Shelter at 12505 Northeast Halsey has been running close to full capacity since it opened Nov. 1. Run by the nonprofit Human Solutions, the family shelter is a bare-bones operation that runs throughout the winter to make sure children are not left outside on the streets.

“We’re seeing a much higher level of need this year, at least for the early part of the winter,” said Jean DeMaster, executive director of Human Solutions. “Generally during the first part of November we have 20-30 people in the family, shelter rising to about 50 people by the end of November. Now we are seeing 90-100 people in the shelter.”

On Wednesday night, Nov. 20, a line of people stood patiently outside the shelter, as staff checked in families, two at a time. Parents arrived with babies and young children along with teens to sleep on cots, with several families to each room. Often, food is donated, but not this day. Instead staff purchased a large takeout meal to be shared among the families. Young mom Shanae said she was glad her daughter Soriya is just four months old, and won't remember the shelter.

“We are not over capacity we are at capacity,” said Mary Li, a human services manager with Multnomah County. “But that’s concerning, because we have a ‘no turnaway’ policy, and thus if we are at capacity we’ve got to be prepared for that next one family that comes in. That triggers us to go into the overflow.”

The Family Winter shelter can comfortably handle up to 80 people and can accommodate 90 to 100 people. Numbers above 100 trigger opening the overflow shelter, at Highland Christian Center at 7600 NE Glisan Street. Currently Highland is open as a day shelter.

Family homelessness grew by 17 percent between 2011 and 2013, in Multnomah County, advocates say, yet at the same time state emergency shelter and assistance funding fell 25 percent from 2007 levels. The Walk of Homelessness Awareness this year is focused on asking Oregon State legislators to return that funding to 2007 levels.

The winter shelters are part of a network that includes the Daybreak shelter system, which operates year round. Run through 15 church congregations, the Daybreak program employs staff members who work to get families off the streets and back into housing. Daybreak can cope with 15 people at a time. Portland Homeless Family Solutions runs an additional shelter in Goose Hollow with 27 beds, and Common Cup offers seven beds.

Li says the county is in the process of hiring more staff, and quadrupling funds for rent assistance. This year the county added $600,000 to its rent assistance program, while the City of Portland added $700,000. This one-time funding won’t continue unless it is added to next year’s budgets.

Falling unemployment figures announced this week, signaled Oregon’s economy is slowly recovering. But little has changed for the state’s poorest citizens, many of whom were struggling even before the recession.

DeMaster says two other factors are driving the increase in families seeking shelter. Rentals are difficult to find in Portland, she says, especially for the lowest-income families.

“The vacancy rate in the rental market is 2 percent or less. So when people lose their housing for any reason it is really difficult for them to find somewhere else.”

The other reason for the rise in numbers is more positive. In previous years families heard about the shelter through word of mouth. This year the 211 emergency line is referring families for shelter.”

“We have become a much stronger system,” DeMaster says. “They’re doing a really good job. It’s much better publicized so everyone is coming right away.”

Li said Multnomah County is committed to preventing families from coming to harm on the street.

“Everyone had a place to be last night. There was no-one who did not have shelter last night. And no-one will be without shelter tonight.”

The Time to Listen -- Time to Act campaign is asking people to write letters calling on the Oregon Legislature to restore state funding to pre-2007 levels to assist people to move into housing.