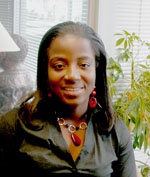 After a long period of inactivity, the Portland chapter of the National Association for the Advancement of Colored People has elected a new leader.
Named president this week, Charlene McGee, 25, will lead the chapter after attending only a handful of meetings.
"I definitely didn't think I was going to walk out as president," said McGee.
The young leader said she was surprised when several of the NAACP chapter's elders nominated her for the position at a meeting held Saturday, April 28 at Portland Community College, Cascade.
McGee, who emigrated from Liberia in 1993, works at the Multnomah County Health Department in the African American sexually transmitted diseases disparity program. She said eliminating disparities in all areas of the Black community is one of many goals she has as chapter president.
A few days after accepting the nomination, McGee is working to build up a chapter that has been largely inactive in the recent past. Immediate past president Chad Debnam said he doesn't know McGee but wishes her well. Debnam said he ran into conflict when he proposed a post-civil rights era strategy that focused on personal responsibility and economic empowerment.
"If we are not providing a strategy of a post-civil rights era, we are lost," he said.
McGee said she knows little about the chapter's past problems and doesn't want to make it an issue. From now on, she wants to focus on expanding the chapter's membership across racial, age and gender lines, and helping Portland's communities of color.
"Whatever happens in the past stays in the past," she said. "I know we need to move forward."
As part of her plans for the future, McGee hopes to increase recruiting and activity among young people.
"We need to get in there and get dirty, understand the system … the system that we live in," she said. "What better way to bring about change than to be a better part of it?"