Brian Stimson of The Skanner
Published: 02 May 2007 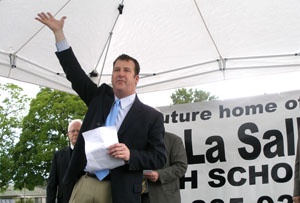 left: Matthew Powell, president of DeLaSalle, speaks to a crowd of teachers and students at a groundbreaking ceremony at the new school site, May 2.


It's taken one year and $6 million, but students and staff at De La Salle North Catholic High School hope a new location will raise the private school's visibility and give De La Salle ample room to grow.
"I'm hoping we're there for the next 100 years," said Tim Hennessy, De La Salle's vice president of advancement.
Enduring rain and hale, De La Salle staff hosted a groundbreaking ceremony May 2 to celebrate their move into the old Kenton Elementary School at the corner of North Interstate Avenue and North Lombard Street.
"It's a unique partnership with Portland Public Schools and a Catholic school," said De La Salle President Matthew Powell.
According to school officials, the school has outgrown its current campus.
"We were very challenged for space," Hennessy said of the private catholic school, which helps some of North Portland's most vulnerable students, accepting youth that have fallen behind in the public school system and coaching them onto a college-bound path. A majority of the school (55 percent) are students of color and half do not identify as Catholic.
The school's current campus at 7654 N. Delaware Ave. will be used to house a new alternative high school.
De La Salle leaders had been searching for a bigger property for years when Portland Public Schools put the old Kenton School building up for lease a year ago.
Over the course of a year, contractors have turned the 1913 elementary school building on North Fenwick Avenue into a high school. The building needed several upgrades, including bathrooms to accommodate older students, a better kitchen and new library, technology center and elevator.
Hennessy compares the interior of the building to the renovated Kennedy School on Northeast 33rd Avenue, with classic hardwood floors and retrofitted bulb lighting replacing the standard fluorescent. With a 20 year lease and an option for at least 30 more after that, the school also decided to build a $3.3 million dollar gymnasium on the east side of the property. Total costs for renovations and new construction were more than $6 million.
The new building should allow De La Salle to accept more students, Hennessy said.
The school is still accepting applications for fall of 2007. Hennessy expects the school will accept about 90 freshmen, with a total school size of about 245 students. De La Salle hopes to grow to 350 students in the near future.
A bigger building also means more space for electives, and the proximity to the MAX station will help students travel to their weekly corporate internship jobs.
Each student is required to work one day at a designated workplace – from Nike, Xerox, and Schwabe, Williamson and Wyatt to Freightliner and Kaiser Permanente – helping to pay for the cost of their education, which is significantly lower than other area private schools. Scholarships also are available for low-income families.
Only one-third of students' families pay the full tuition.
Both Powell and Hennessy said the school has proven a successful academic formula. Of the graduating class of 2007, 100 percent have been accepted to college.