Five Things You Can Do to End the New Jim Crow 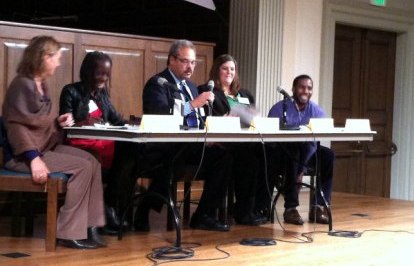 By Helen Silvis of The Skanner News
Published: 06 November 2013

The Partnership for Safety and Justice held a panel discussion on  "Ending the New Jim Crow--Healing our Justice System," Nov. 5 at First Unitarian Church in Portland.

More than 70 people took part in the discussion that looked at how rates of incarceration have risen in Oregon, at the same time crime has dropped.  One key question was how to stop the overrepresentation of people of color in the legal system.

Moderator Rep. Lew Frederick asked each panelist to offer one thing anyone can do to end "The New Jim Crow." Here's the list:

Shannon Wight, deputy director of Partnership for Safety and Justice:
"Measure 11 has an incredibly disproportionate impact on people of color. Youth end up with a felony on their records which is life ruining. We are ruining young peoples'  lives. It's not right to saddle youth with a lifelong felony."

Passed by initiative in 1994 Measure 11 imposes mandatory minimums for crimes that are considered person-to-person. It says youth 15 and older must be tried as if they were adults for those offenses. Judges can't use discretion. Under Measure 11, only prosecutors not judges have any power to reduce charges and sentences.

2. Prepare to speak out at a Fairness Hearing on the City of Portland settlement with the Department of Justice.

"I think the most important thing that we can do is to prepare to participate fully in the Fairness Hearing that Judge Simon will schedule.

"The public has never had an opportunity to make their views heard. When the settlement agreement was announced, the public had not seen it. It is really important that we do not allow the City of Portland to pretend that there was a full public process.
"We will pay $26 million over the next five years, and the people out of the gate spending that money are not the people we want to be in charge."

The Fairness hearing will likely be held in 2014 to discuss the settlement agreement between the Department of Justice and Portland Police Bureau. The DOJ found that Portland Police Bureau had a pattern or practice of violating the rights of people with menatl illness. It also raised concerns about police relationships with communities of color. (Download a pdf of full report here)  Judge Simon, who has been supervising the case in federal court will name a date for the Fairness Hearing, when he reviews the agreement on Nov. 18.

3. Educate ourselves: Understand the legal system has no flexibility.

Kasia Rutledge, a public defender in Portland's START court, which deals with property offences committed by people with alcohol and drug problems. Rutledge also handles expungments.
"You mean besides economic opportunity, healthcare, housing and alcohol and drug and treatment?" Rutledge said first when asked what she would prioritize.
"The system works perfectly. It does exactly what it was set up to do, which is incarcerate certain people. We don't need system reform. We need a new system.
"I can't tell you the number of times we have trials, and after the sentencing a juror finds out the sentence that was handed down, and they are devastated at what the defendant got. So turn up for jury duty and actually stay there."

4. Teach kids how to act in public, how to know their rights, and educate them from 5th grade up about the prison system.

Emanuel Price, founder of the nonprofit Second Chances are for Everyone, which helps people with felony convictions rise above the stigma and discrimination that prevents former felons from getting jobs and living normal lives. Price shared his story with the audience. After making a bad decision in the summer before his final year of college, he spent five years in prison.

Rep. Lew Frederick added his own take on the issues. The laws are made in Salem in the Legislature, he said, so make sure your legislators know this is an issue that matters to you.

5. Elect lawmakers who will use their votes to end mass incarceration.

"The Urban League of Portland has had a really strong presence in the Legislature, and were there almost daily. If folks are showing up there it makes a difference. Also, just about every legislator has a monthly town hall. Show up and let them know this is important. If you don't tell them this is a problem, they won't be paying attention."

The event also recognized the death of police accountability advocate Fred Bryant with 30 seconds of silence. Bryant's son Keaton Otis was shot and killed during a traffic stop after a gang enforcement police officer thought he looked like a gang member.

The Partnership for Safety and Justice has opened a national search to replace executive director David Rogers who plans to leave the position at the end of this year.

First Unitarian will continue the discussion Nov. 21 at 7 p.m. Contact is Teri Martin.

The Campaign to End the New Jim Crow meets from 11 am to 1 pm every first and 3rd Saturdays at Portland Community College, Cascade campus Student Center, Room 204.

MORE: Read the Urban Institute Report on how to reduce federal sentences. (Pdf.)