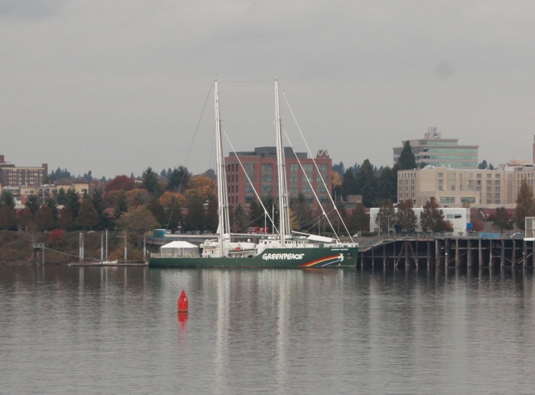 Russia has dropped charges of piracy against 28 Greenpeace activists and two journalists who were arrested during a protest against Arctic drilling in September. But the Arctic 30 will still be charged with hooliganism, which carries a sentence of up to seven years in prison, according to Russian news agency RIA Novosti.

Captain Joel Stewart, who brought the Greenpeace ship The Rainbow Warrior to port in Vancouver, Wash., last week, said allowing drilling in the Arctic would be catastrophic to our climate, our air and water supply.

"We need a World Park Arctic, just like we have a World Park Antarctica, where the resource extraction will not be allowed to go ahead. That will make the incarceration of my people, my friends worthwhile. But we need to ask that these Arctic 30 people be freed immediately."

"They are climate defenders; in my mind they are heroes."

The original charge of piracy carried a sentence of up to 15 years.

"We will contest the trumped up charge of hooliganism as strongly as we contested the piracy allegations. They are both fantasy charges that bear no relation to reality," Vladimir Chuprov of Greenpeace Russia said in a statement.

The New York Times reports that coverage in Russia's state-controlled media has been relentlessly negative including allegations that the protest was orchestrated by Western companies that want to undermine Russian energy company Gazprom.

The "Arctic 30" were arrested in September after two activists left their ship, the Arctic Sunrise, and attempted to scale an oil platform owned by Gazprom in the Barents Sea.

The Russian coast guard detained the pair and the rest of the crew, and towed the ship to the northwestern Russian port city of Murmansk.

"Those brave men and women went to the Arctic armed with nothing more than a desire to shine a light on a reckless business. They should be with their families, not in a prison in Murmansk," Chuprov added.

Greenpeace said the two activists were trying to hang a banner from the side of the rig in what the group called a peaceful protest against the "slow but unrelenting destruction of the Arctic."

But Russian authorities accuse them of trying to commandeer the platform. The authorities and Gazprom also say the activists endangered the lives of the company's employees and that their action could have led to an environmental disaster.

Along with the hooliganism charges, the chief of Russia's Investigative Committee, Vladimir Markin, said some members of the group could also be charged with using force against state officials, according to RIA Novosti.

The defendants include Americans Peter Wilcox, who is the captain of the Arctic Sunrise, and Dmitry Litvinov, who Greenpeace says also holds Swedish citizenship.