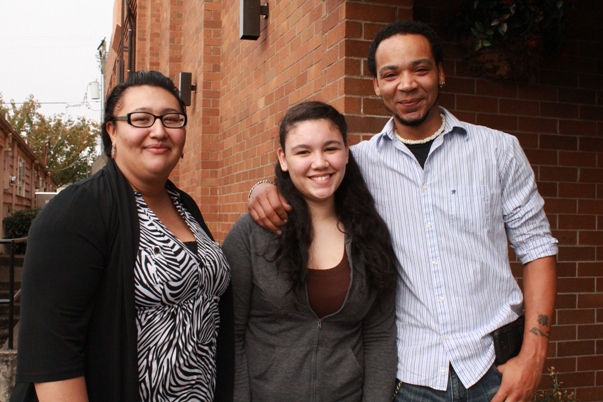 By Helen Silvis of The Skanner News
Published: 01 November 2013

Johnny Hollingsworth and his 14-year-old daughter Emoni spent five months on the street this summer. "We were in a domestic violence situation so we had to leave our housing," says Hollingsworth, whose wake-up call came when he woke up with a gun in his face.

Hollingsworth knew he had to get his daughter to safety, but he didn't know how hard it would be to be a homeless parent.

"We've ridden the MAX for hours just so she could have a place to sleep," he says. "I've been homeless on my own, but it's so different doing it with a child. It's been a rough road."

Now with help from the nonprofit Human Solutions, the family has a place to stay and Hollingsworth is getting help to find work and permanent housing.

"I want to say to all those parents with kids out on the street, 'Please don't be afraid. Give Human Solutions a call,'" he says.

Multnomah County has pledged that no family will be turned away this winter. Homeless parents can simply turn up to the shelter, or call 211 to get directions. Human Solutions main number is 503-548-0200.

A new day shelter, just for homeless families, will open Monday Nov. 4 at Highland Christian Center, 7600 NE Glisan, Portland. It's part of a network of family shelters that will make sure every homeless family has a place to sleep and a place to stay warm during the day.

Mary Li, division manager of community services for Multnomah County said 42 percent of people of color who are counted as homeless are families with children.

"People of color are overrepresented in the homeless population, which is why partnerships with diverse organizations, like the 30 churches we are working with, are so critical," she said. And that's why we are actively targeting funding dollars to culturally specific services."

Jean DeMaster, executive director of Human Solutions said that while the recession may officially be over, "It is not over for poor people.

"We are seeing an increase in homeless families, especially families who are hard hit by the recession and the fact that our families can't get living wage jobs."

Pastor W. G. Hardy said he thought of the 18,000 people displaced in the 1948 Vanport flood, when he decided to offer the church building for use by the day center.

"The African American community in Portland became instantly homeless," he said.  Many Vanport residents lost their photos, treasures, everything they possessed that day. "Everything sacred to them was gone in a flash."

Hardy's parents told him the story of the flood, and how Portland churches and citizens rallied to help.

"So if I'm in a position to open doors for other Oregonians who are homeless, why shouldn't I do that?"

The Parkrose shelter has space for 100 people at night, but just 70 during the day. Human Solutions also operates the 15-bed Daybreak Shelter Network.  Portland Homeless Family Solutions runs a 27-bed family shelter in Goose Hollow. The City of Portland will operate a shelter for 70 single women.

In the past, Human Solutions held a lottery to decide who could stay inside, and who had to leave. Opening the day shelter at Highland Christian Center  means from now on no families will have to be on the street during the day.  And if more family shelter beds are needed this winter, Highland has agreed to host a night shelter too.

"There is no person, no parent who wants to be homeless. And in a perfect world no-one would be," said Multnomah County Chair Marissa Madrigal at the day center launch.

"The need is huge and heartbreaking, but the effort to meet the need is inspiring."

Even affordable housing often is priced too high for people under 40 percent of the average family income, DeMaster points out.

A new 67-unit affordable housing complex on NE 102nd and Glisan, created with state, city and county funds, will house families earning from 40-60 percent of median income. But with rents priced from $400 to $700, it is beyond the reach of people on welfare or those in low-waged or part-time work.

This is a problem that can only be solved on a national level, DeMaster says. "We need housing that's affordable to people at very low income levels."

Li urged the public to join in the effort to help homeless families by donating bedding, food, books, toys, clothing and volunteer time.

"No one person can end homelessness but we can all contribute to this effort," she said.

The support means a lot to Johnny and Emoni Hollingsworth. Johnny, 33, became a father at just 19 years old, after a childhood of insecurity. Today he is taking Emoni to register at high school. Then he begins his job search. With experience in a long list of laboring jobs, he says he'll take anything he is offered.

"Failure is not an option for me," he says. "I just want to make my child happy.

Emoni knows she has six weeks of catching up to do, but she is not daunted.

"I want to be a judge or an attorney when I get older," she says. "I like school."