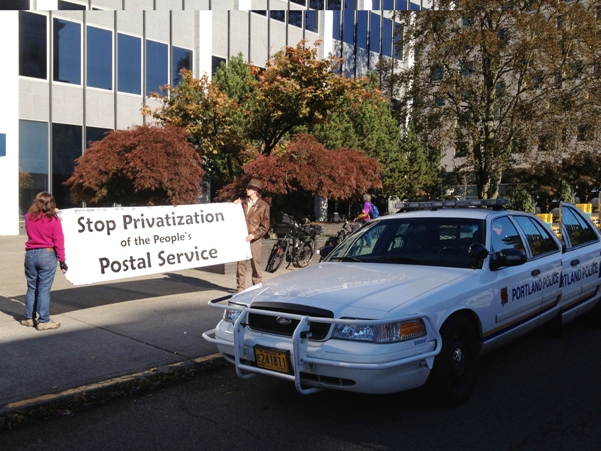 Seven protesters were arrested at the U.S. Post Office on SW Couch Street Tuesday, after an attempt to occupy the building. They were charged with criminal trespass.

The protesters, part of the Portland Communities and Postal Workers United  group, are opposing cuts to the US Postal Service, and the outsourcing of union jobs to private corporations.

"Postal mail handlers and processing clerks have lost their jobs in Salem as the work is contracted to the low-wage, non-postal, non-union Matheson corporation in Portland," the group say in their press release. "At the same time, Portland postal truckers are being put on standby while the low-wage, non-postal, non-union, Dill Star/LAPO trucking company takes their work."

In September 2012 the US Postal Service reported a $15.9 billion loss. That triggered a string of cuts and changes that have closed mail processing centers and post offices across the United States.

The causes of these troubling losses include a sharp decline in the number of letters written and mailed. The post office has not so far gained enough of the market share for packages to compensate for these losses.

But the postal workers advocates say politically motivated legislation is a key reason behind the problems.

"In 2006, the GOP Congress passed a bill that required the Postal Service to fully fund future retiree health benefits for the next 75 years and to accomplish this within a 10-year period. Republicans are always insisting that the USPS be run like a good capitalist enterprise, but few, if any, private businesses could bear the burden of funding three-quarters of a century of retired employees' medical costs over just one decade."

Advocates for the postal workers say this requirement has created an artificial crisis. And they point out that elderly and isolated people depend on the mail service for medications, disability checks and other vital mail.

Other Republican proposals to stanch the losses include:
ending Saturday delivery
replacing delivery to individual houses with deliveries to neighborhood boxes.
ending delivery to rural areas and unprofitable routes
Conservative think tank the CATO Institute currently is advocating for wholesale privatization of the postal service.

Yet Congressional Republicans have been unwilling to get rid of a 1909 temperance movement inspired law that forbids USPS from shipping alcohol, a potentially lucrative market area.