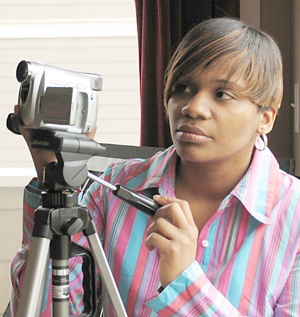 Nation Son Holmes, local Seattle filmmaker, will show her first independent feature length film about domestic violence, entitled "W.O.E." (Walking on Eggshells) at the fourth annual African American Film Festival that runs through April 29 at the Langston Hughes Cultural Arts Center, 104 17th Ave. S.
"W.O.E.," was written, directed and produced by Holmes. A narrative, poignant film about domestic abuse and relationships and decisions people make in their lives, "W.O.E." transcends the social boundaries that separate people.
"Domestic violence is a global issue that affects everyone no matter their race, age or socio-economic status," Holmes said. "I want to make sure people understand that it crosses all barrier lines and anyone can be affected by this."
Holmes, 36, grew up in Seattle's Central Area, attended Howard University in Washington, D.C. and studied communications. After returning to Seattle, Holmes completed her studies in communications at Evergreen State College's Tacoma campus where she studied under the tutelage of Dr. Gilda Shepard. A noted filmmaker, Shepard helped Holmes cultivate her knowledge of the filmmaking process. Holmes also is a member of Women in Film and employs youth and minorities to assist her in her film work.
"W.O.E." started as a seven-page short story titled "Eggshells" which Holmes then turned into a feature length film. The film was shot in just two weeks but took about a year and a half to finish in post-production. The film features local actors such as Jace Ecaj, of the Silent Lamb Project (a local rap group) who plays Darnell; Charmion Sparrow plays Paris; Urana Wright is Ann Marie; and comedian and actor Isiah Anderson Jr. plays Dr. Ramsey.
"I think we're misrepresented up on the big screen and I want people to see domestic violence is not just a disease of the impoverished, it's about the choices you make in your life," Holmes said.
Holmes, a twin and mother of four who has a set of her own twins, doubles as a schoolteacher at Alder Academy and works with the junior population of at-risk youth.
"W.O.E." was shown at the brand-new Festival Sundiata earlier this year and received rave reviews.
Holmes also has attended the American Black Film Festival in Miami, Fla., for the past four years and has attended the Tribeca Film Festival in New York for the past two.
"How unique it is that we could do something of this magnitude, coming out of Seattle," Holmes said. "Being from Seattle there is a wealth of talent here, you don't have to go to L.A. or New York to be successful."
"You can make it happen where you are at," Holmes said. "Don't let anyone discourage you from pursuing your dreams whatever they may be."
"In addition to raising awareness about domestic violence with the film, I also wanted to create a film industry here outside of L.A. or New York that supports us and enables us to tell our stories for years to come," she said.
Speaking about the recent domestic violence shooting at the University of Washington, Holmes said, "I think it's sad we have to wait to hear about it on CNN or the local news stations before it's breaking news or considered a big deal."
"Domestic abuse happens daily, it plagues women and children and can have devastating effects on them in the future, especially children," Holmes said. "There are more animal shelters than domestic violence shelters and that's a shame."
Holmes next project, "Let's Get Married," is the story of three models looking for money and love — in that order. With preproduction currently under way, the film will be out in the fall and will feature local talent and celebrity actors.
Another local filmmaker, Malik Isasis, will premier his film "Naked Life," a drama about relationship, desire, trust and loss, at the African American Film Festival.
To purchase a copy of "W.O.E."  or attend the screening, email [email protected]; visit www.fifthavenuenwfilms.com or call 206-850-2721.
For more information about the African American Film Festival, visit www.langstonblackfilmfest.org or call 206-326-1088. To buy tickets, visit www.brownpapertickets.com.