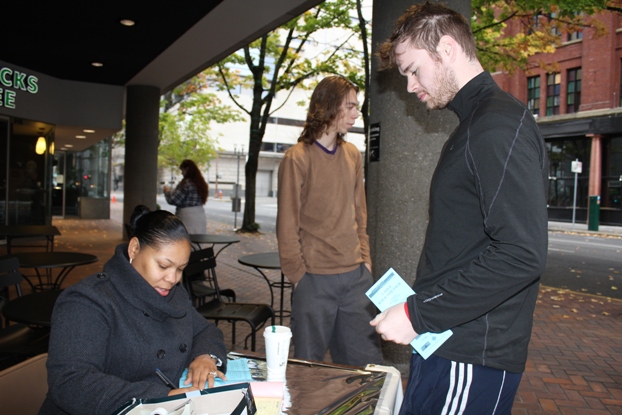 Better People, the nonprofit that helps former inmates return to the community will hold its annual fundraising walk this weekend. Registration for the fundraiser starts at 9am Saturday Oct. 26 with the walk beginning at 10am. Walkers will meet at 910 SW 2nd Ave., next to Starbucks on the corner of SW Taylor St.

"We're asking people who support us and people who are interested in the work we do to come out and support us at this time," says Clariner Boston, executive director. "We will have clients there who will share some of their stories."

Boston says this year's fundraising walk is more important than usual because the organization is facing a budget shortfall of around $50,000. A Multnomah County grant to serve clients returning to the community from prison ended in June. Better People reorganized its budget to compensate Boston says, but now needs to raise more funds to continue its work.

"We work with everyone," Boston told The Skanner News. "We don't turn people away."

Jason W., who graduated from the program, says : "This program gave me more than just a shot at some dead-end job.  It gave me freedom from the shame I was carrying. It gave me the chance to set down the burden of what other people thought of me. It gave me the opportunity to see myself in a new light. It also gave me the chance to look at how I was treating the people around me on an everyday basis. People who only wanted to support me – people whose only concern is my well-being. They believed in me because they always knew that I would make it…I would like…to thank (my parents) for their support, for believing in me and helping…me. …, I think it is time I started fulfilling my lifelong dream to write… So far I have played at it – starting now I will become serious about my dream."