By Helen Silvis of The Skanner News
Published: 14 October 2013

After close to 50 years with Wells Fargo bank, Laverne Hampton is retiring from the Walnut Park branch. Her first day serving bank customers was Sept 14, 1964. Her last day is Tuesday.

"She will be impossible to replace here," said her supervisor Nick Davis, who organized a leaving celebration for Hampton, Monday. "People have been coming in all day to say goodbye to her. We've gotten stacks of flowers and cards. I still think people don't believe it's going to happen.

"She'll be greatly missed and impossible to replace."

Hampton has worked at the branch on Northeast Martin Luther King Jr. Boulevard for close to 35 years.  She was working as a stocker at Meier and Frank's department store when her husband Adron noticed the position.

At first he thought of applying himself, but after finding he would be taking a salary cut, he told her, "Why don't you apply?" She did.

"They hired me and this is where I've been ever since," she says. "I love working with the people."

Hampton has seen customers come in with babies, who now are grown men and women, she says.  She's helped customers start businesses and enjoyed seeing those businesses flourish.

"I hope that we at Wells Fargo helped make them successful."

Hampton has also been robbed more than once, most recently about five years ago. But she has never feared for her life.

"You just do whatever they tell you," she says. "If you follow Wells Fargo guidelines, you have very little money in your top drawer.  The money is not worth your life."

One man came in and robbed one of her colleagues, she says. Then he stepped back, threw the money in the air, and told the tellers to call the police.

"I think he wanted a place to stay," she says.

Teletha Benjamin says she will miss Hampton taking her to open her safe deposit box.  Benjamin knew  Hampton a little, even before she first opened her bank account in 1958. Later she moved to the Broadway branch of First Interstate, which merged with Wells Fargo in 1996. And when Hampton moved to the Walnut Park branch, Benjamin  moved all her accounts there too.

"I appreciate walking into a branch where people know my name.  I feel I get excellent service there, and a lot of that is because of Laverne," Benjamin said.  She's a role model for all the staff at the branch."

Over the years, Benjamin says, Hampton helped her discover new products, corrected any errors and was always willing to help.

"Laverne has always been a stable steady person. Her presence inspires confidence.  She makes you feel at ease and welcome, which is not always the case for people in customer service." 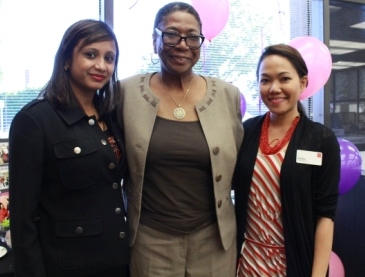 Benjamin plans to arrange a celebration lunch with Hampton, after her last day, Oct. 15. "I'm happy for her that she's about to retire," she says. "She deserves a break."

Hampton says Wells Fargo is a good company that cares about its customers, and has given her a good career. But she's excited to be making plans to visit her son and two grandchildren in Arizona, and to  see a little more of her other son in Beaverton.  With landscaping her garden and organizing her home, and checking off her list of places to visit, she thinks she'll be quite busy enough.

"I'd love to spend some time near the water at Seaside and Sandy," she says. "And I'm going to see some of what Portland has to offer. The Pittock Mansion, the Columbia River Gorge, the Japanese Garden: there are so many sights I've never seen. "