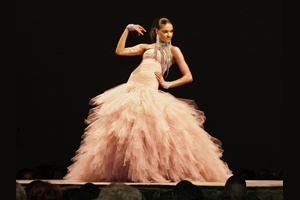 "Stylishly Hot" was the theme of this year's 49th annual Ebony Fashion Fair, held April 20 at the Portland Convention Center, and hot it was, with 13 gorgeous models ripping the runway in outfits by Oscar de la Renta, Carolina Herrera, Bill Glass, Vivienne Westwood and Chloe.

"I just love it," said Lois Jackson, a longtime fan of the Ebony Fashion Fair. "I like to see our Black men and women putting on things so nice."
Attendees gave the models a run for their money, wearing their chicest dresses and most stylish suits.
Lisa White, Gregette Ashford and Rachell Carroll had never attended the Ebony Fashion Fair, but when a friend called White to invite her, she didn't have to do much convincing.
White laughed about how easy it was to get her friends to come with her.
"(My friend) called me and said 'Girl you have to come, you can't miss it', so I called Rachell and Gregette and said 'Girl you can't miss it,' " White said.
Sponsored by the Portland Chapter of the Links, the annual fashion show benefits local young women.
Alexis Mitchell, a student at De La Salle High School, is one of nine girls who received a scholarship from the Links.
"There were essay questions you had to apply for, I did them and received a $1,000 scholarship," Mitchell said.
The scholarship recipients had some of the best seats in the house and sat to the right of the runway, near the press.
The night offered a little something for everyone. 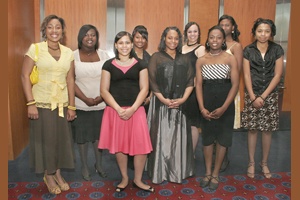 
The show's producer and director, Eunice W. Johnson, came up with fabulous scenes like "Street Heat," which was dedicated to younger generations with its denim, its bustiers and its glitter based designs. Models wore over-embellished designs, mixed with bright colors and sassy hats, and clothes by designer Vivienne Westwood — known for her raw, punk style – were showcased during this scene.
Other scenes had names like "Hot Chocolate," "Paisley Pepper" and "Bling Bling Blaze." The constant changes kept the audience in awe of the flowing couture dresses, and outrageous suits and hats.
The audience really loved the sight of Dwanna Randolph, the show's full-figured model, who strutted down the stage with total confidence, looking beautiful in a long gown by designer Bill Blass. The Detroit, Mich., born model has a catwalk that keeps everyone's attention. Even the fashion show's commentator, Jana Collins, had to give Randolph what was owed to her, "Get it Dwanna, work it girl." Collins said as Randolph worked her way down the runway to whistles and applause.
Ronnel Blackmon and Justin Brown, the male models of the show, did not let the women outshine them. They strutted in their Calvin Kline suits, slacks, button ups and sweaters down the runway like they owned the stage. Blackmon and Brown wore regal, distinguished pieces, also provided by Roberto Cavalli. 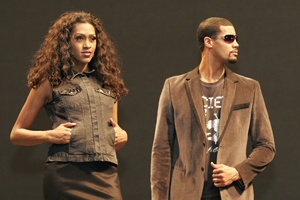 Fashions geared toward younger generations were on display at the 2007 Ebony Fashion Fair, held April 20 at the Convention Center.


The theory less is more did not exist at this year's Ebony Fashion Fair, and designers didn't give fur a second thought. Angelo Marani, a Milan designer, showcased a tri-colored fur coat atop a tiger-print corset.
A plush, beaded fur coat from designer Roberto Cavalli, worn by model Jeena Daramola from Washington, D.C. was one of the biggest crowd-pleasers, prompting attendees to turn to their neighbors and voice their opinion.
"Ooh that's cute," Misha Allen, who never misses the fashion fair, whispered to a nearby friend. "I would definitely wear that." 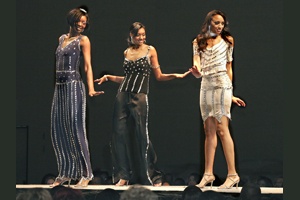 Sequins added sparkle and glamour to many of the designer frocks in the 49th annual Ebony Fashion Fair. 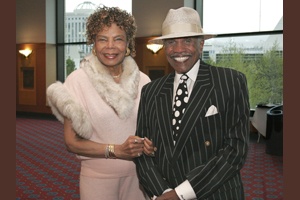 Entering the Ebony Fashion Fair looking like they deserve to be up on the runway themselves are Geneva and Paul Knauls, who have attended the event for 25 years.