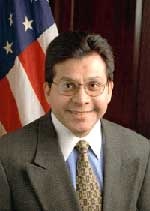 Department of Justice and the Bush administration with his poor handling of the firing of eight federal prosecutors, a leading Republican senator said Sunday.
Sen. Arlen Specter of Pennsylvania, the top Republican on the Judiciary Committee, stopped short of calling for Gonzales' resignation.
But he said there was "no doubt" Gonzales was undermining the agency and the morale of its employees.
"The attorney general's testimony was very, very damaging to his own credibility. It has been damaging to the administration," Specter said. "No doubt, it is bad for the Department of Justice. It is harmful. There has been a very substantial decrease in morale. There's no doubt about that."
Asked whether Gonzales should resign, Senate Judiciary Committee Chairman Patrick Leahy, D-Vt., said: "I don't think he can be effective" if he ignores the growing pressure on him to resign as the nation's top law enforcement official.
"A lot of those calls are coming from Republicans," Leahy said. "He's lost the confidence of many Democrats and Republicans in the Congress, and many people throughout America."
Specter said Sunday that he didn't think it would be appropriate for him to call for Gonzales' resignation, saying that is the decision of the president or Gonzales himself. Sen. Charles E. Schumer, D-N.Y., and Tom Coburn, R-Okla., are among the lawmakers who have called for Gonzales to leave.
"I do not think that it is appropriate for me to call for his resignation," Specter said. "I don't challenge anybody else who wants to do it. But my own mindset is to leave it up to the attorney general and the president."
Schumer, one of Gonzales' most vocal critics and the first to call on the attorney general to resign, maintained Sunday that Gonzales ought to resign as soon as possible.
Specter and Schumer spoke on "Fox News Sunday." Leahy was interviewed on CBS' "Face the Nation."
--The Associated Press