SEATTLE – Seattle's new schools superintendent attracted a lot of fans and plenty of detractors in her previous post in Charleston, S.C.
"Y'all are lucky," Mary Graham, senior vice president of public policy for the Charleston Metro Chamber of Commerce, said of the woman who is leaving the top post at Charleston's school district to head Seattle Public Schools. "She's great."
But Larry Kobrovsky, a lawyer and former Charleston County School Board member, said of Maria Goodloe-Johnson's departure, "I think it's a good thing for Charleston. I think that there was too much emphasis in the minority community on protecting her."
During her three-plus years in Charleston, Goodloe-Johnson attracted strong rants and raves concerning decisions about schools, racial issues and her personal life.
"To tell you the truth, I think it was dishonorable of our board not to fire her a few months after they hired her," Charleston County School Board member David Engelman said.
Goodloe-Johnson became pregnant out of wedlock, Engelman said. "I thought that was a hell of a bad role model for our schools." She married before her daughter was born.
Koborovsky said he thought the community was behind Goodloe-Johnson because she is a Black woman, even though some schools were failing or below-average in the district.
"I never saw where they ever addressed the core problem, which was the lack of discipline and respect in the classroom," he said. 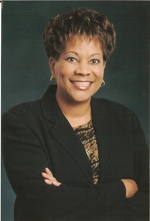 During her tenure in Charleston, Goodloe-Johnson faced a threat from the state superintendent of education last year to take over a high school because, of the 27 schools the state rated unsatisfactory in 2004, it was the only one that did not implement a state improvement plan.
"There are no excuses," Goodloe-Johnson said at an August hearing, according to a report in The Post and Courier, Charleston's daily newspaper "It's embarrassing. This should have been done."
Goodloe-Johnson convinced state school officials to let her keep control of the school, saying she hired a new principal with a track record of turning around failing schools and had a plan to fix problems.
The paper also pointed to accomplishments, such as setting a six-year improvement plan, replacing a school for troubled students that was failing with a privately run academy and increasing the percentage of students scoring 3 or higher on Advanced Placement exams to the highest in district history.
Jon Butzon, executive director of the Charleston Education Network, a public education advocacy and policy group, acknowledged that not everything Goodloe-Johnson tried worked, but he said that it's still early to evaluate many of her efforts and lauded her for trying.
"We have gone for years here through superintendent after superintendent who would look at these schools and go, 'Somebody, someday ought to do something about that,'" he said.
Graham echoed this, saying some people unrealistically expected change overnight.
Goodloe-Johnson improved the fiscal practices of the district, Butzon said, adding that she also hired a good chief academic officer.
Her supporters unseated her opponents in the most recent School Board election, Butzon noted, something he saw as validation of her approach. In Seattle, Goodloe-Johnson could face a very different board than the one that hired her, given that four of seven board members are up for re-election in November.
Goodloe-Johnson worked well with members of the business community, Graham said.
"She's always been terrific for us to work with, very open and willing to meet on issues," she said. "When asked the tough questions, she's never had a problem answering them."
Butzon also said Goodloe-Johnson is good with people, although he added that she is single-minded and direct in a way some see as stubborn.
"When you get in a meeting with her it's, 'Here's the problem and this is what I think we're going to do about it. What do you think of that?' " he said. "If you've got a better idea, she listens to it."
Engelman said Goodloe-Johnson is all talk.
"She's full of plans. She's an excellent extemporaneous speaker. She can handle questions real well," he said. "But there's no follow through."
—The Associated Press