Behind the Makeup: Nikki Brown Clown 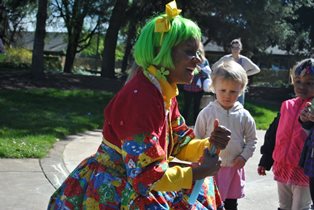 A lot of people are afraid of clowns. Frankly, many Portlanders are afraid of Black people. Imagine if they saw a Black clown speaking Spanish.

That's just what Nicole X does when she dons her makeup and begins strolling. Clad in rainbow socks, a quilt-like dress, and green hair with a yellow bow on top, her style is as colorful as she is. She speaks with a Southern accent, exudes Nation of Islam inspired principles of self-sufficiency and gets down to Motown.

Not only are people not afraid, but children and adults alike gravitate to her.

"One of the things I love is that I'm an approachable clown," says Nicole. "I like to watch as people watch me."

Her character, Nikki Brown Clown, helps raise money for nonprofits through her business PDX Brown Clown. Wherever she performs, more people spread the word. The company's growing reputation has taken Nicole all the way to Chicago for The Nation's Savior's Day Convention.

As a teen working at McDonald's and Farrell's Ice Cream Parlour, Nicole loved children's birthdays. She would dress up at every opportunity and started scheduling celebrations. It beat the boredom of working the counter and gave Nicole an outlet to be creative.

In 2011, her aunt, who worked for Wells Fargo, invited her to perform at the Juneteenth festival. The aunt recalled her filling in for a clown at a block party nine years prior.

Since this wasn't a makeshift gig, Nicole knew she'd have to get serious.

She went from store to store to find pieces for her outfit. By the time she finished piecing things together, she fooled many for a professional.

"It fit me to a tee," she says. "I'm not the biggest person. Nor am I the smallest but I am a particular size. To pull something off the rack—a $12 dress—you can't go wrong."

After her success at Juneteenth, other Black organizations began reaching out. She did events on short notice, mostly free of charge. She just wanted exposure.

Things got serious this past spring. Nicole took a three day, intensive workshop for the Rose Festival. After the workshop, she traded in her Mid-K makeup for professional grade clown cosmetics. 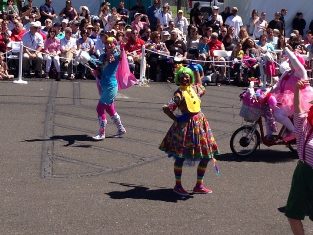 After becoming official, she registered her business with the state.

Now, nonprofits are putting her in their budgets.

It's important to her that the Brown Clown is separate from her job at Multnomah County. She wants to make sure she can share it with as broad an audience as possible. Specifically, she feels the character can be a tool to serve the underserved.

The business also represents self-sufficiency, a major tenet of the Nation of Islam.

The American education system only teaches people to be consumers and workers, she says. Nicole wants to demonstrate that there are more empowering alternatives. She notes that thinking outside of the box helped her make the most of her jobs as a young person.

Her hope is that kids see they can do their art however they wish. She told this to children at the Junior Rose Festival.

"They were like, 'You're a girl clown. You're a Black clown,'" says Nicole. "They had a look like, 'Oh, I can do something different.'"

Although the Brown Clown started with Black organizations, Nicole gets the full spectrum of clients.

Lents Founder's Day sticks out to her, as she reflects on the large, diverse Asian population that embraced her.

"You didn't have to speak their language. They got it," she says. 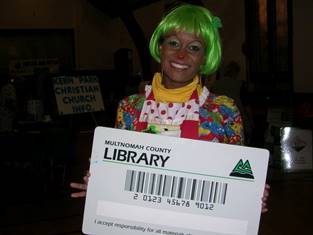 Still, she wants to expand her command of language. Her goal is to be able to hold short conversations with anyone she comes across.

In fact, speaking Spanish was part of her Rose Festival audition.

"I can come back with something that no one else would say," says Nicole. "Más o menos means neither here nor there and that's kind of funny when a clown says that."

Culture is a large part of her character's approachability. She bases Nikki Brown Clown on classy, Southern women she's met over the years.

Nicole's mother is from Virginia, her father is from Alabama and she spent three years in the South as an adult.

"I tease my friends that I'm bi-coastal," she says.

Whenever she gets a compliment, she gives it back, usually saying, "I'm a reflection of you sugar."

Older Black women, especially, take to the character. Nicole has met many who have never seen a Black clown before.

"Two or three older Black women had told me, 'I used to be scared of clowns but I'm not scared of you,'" she says.

Unlike others, she tries to show as much of her Black skin as possible.

For the most part, she strolls around events and makes sure people enjoy themselves. 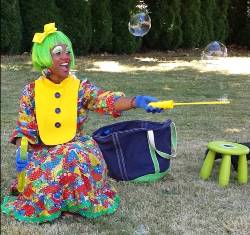 Specifically, she likes to keep the children active. Bubbles are her signature.

"Usually if I bring the music, I bring Motown music because it's multigenerational," says Nicole. "And of course, a party's not a party without the Electric Slide and Cupid Shuffle."

This past February, she was honored with an invitation to perform at the Nation of Islam's Savior's Day Convention.

When she joined, she wasn't sure she'd be able to continue clowning.

Before the convention, word got out that the Children's Village was looking for volunteers. Nicole's sisters encouraged her to send a request. To her surprise, she got a response from Mother Khadijah Farrakhan's assistant, inviting her to Chicago.

"That was a dream come true," says Nicole. "At that point, it validated, solidified that I can still do this and be a Muslim at the same time."

She smiles when she reflects on the ballroom filled with bounce houses, choo choo trains and children representing everywhere from the countries of Africa to London. All of the children were polite, well dressed and well educated. Despite the seriousness of their lives, they were excited to see her.

One boy in particular stood out. Nicole says he was around nine or ten, the age where children start pulling away from clowns. Dressed in his suit, he walked over to Nicole and told her, "You know, I can tell you're a fun grown up. You know, you don't have to dress like a clown." 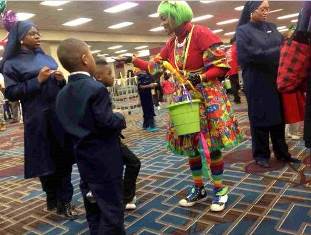 "Being a student of the Most Honorable Elijah Muhammad, he would always say, 'Accept your own and be yourself.'

"That was one those moments where you're like, 'You're too smart. Just enjoy the moment,'" she laughs.

Nicole is proud that her character can transcend the lines of age, sex and race. In cases like that of the boy in the Children's Village, her tricks and charm don't always work. Ultimately, she's more concerned that people enjoy themselves.

"Most of the time, people won't remember what I did or what I said," says Nicole. "It's really how I make them feel."

For more information or to book Nikki Brown Clown, call (503)-954-9519, email her at pdxbrownclown@gmail.com or find her on Facebook.