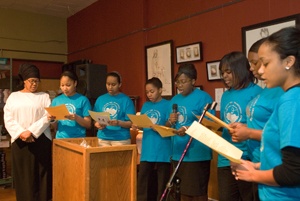 Shafia Monroe is ecstatic and it shows.
Long noted for her role as a traditional midwife, Monroe is used to making the news. But a recent article in the esteemed national parenting magazine Mothering has dubbed Monroe, director of the North Portland nonprofit International Center for Traditional Childbearing, a "living treasure."
Typically, this back-of-the-book honor is reserved for women and men much older than Monroe, but one of Monroe's projects caught the interest of Mothering's editors, so there she is, smiling out from a full-color magazine page, radiant in a scarlet head wrap and matching jewelry.
"Shafia Monroe is a visionary birth activist," the magazine states. "For more than 30 years she has celebrated the contributions of African American midwives, helping them to connect to one another and to an underserved public."
Monroe's most recent project – the one that kicked off Mothering's interest – goes a few steps further in this effort to connect Black midwives to families in need of culturally specific healthcare services.
After five years, Monroe has published the first-ever "Directory of Black Midwives and Prenatal Providers."
"This really has been a labor of love," Monroe says of her new directory, available in a few local bookstores as well as online at www.sistahmidwife.com. "Now it's going out worldwide and I'm extremely excited."
A compact, spiral-bound book, the new Black midwives directory spans all 50 states and includes much more than just a listing of midwives.
"We're a small number," Monroe says of Black midwives. "In some states there are no Black midwives. ... So I knew I needed to make it thicker."
The book lists other Black healthcare providers such as prenatal yoga teachers, chiropractors and others who can assist a pregnant woman in her journey toward becoming a mother.
Glossy pictures of state flowers peek out from the various state sections – an idea that appealed to Monroe, a mother of seven.
"I've always wanted to learn the state flowers so I added them and I can picture women sitting down with their children, teaching them about the flowers," Monroe said.
When her son suggested adding words of wisdom, Monroe took his suggestion one step further and added words and recipes of wisdom.
The essential recipes include offerings from other midwives, as well as from Monroe herself. 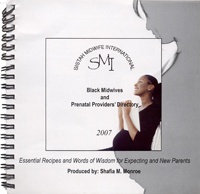 Released only a few weeks ago, the directory has already garnered some international attention – Monroe said she knows that a few women from Somalia have taken copies of the directory back to Africa and that the book has already started to spread across the country.
The need for such a directory prompted Monroe – who is already extremely busy being a midwifery advocate in Portland as well as places like Africa and Colombia – to create her guide.
"It is hard to find a Black midwife," she said. "I've had physicians calling me (from across the country) looking for Black midwives to work in their clinics."
In fact, it was her own experience as a newly pregnant woman that actually prompted Monroe to give up a college path toward obstetrics for traditional midwifery – a move she made more than 30 years ago and has never regretted.
For this "living treasure," being a midwife is a lifestyle, not a profession.
"Midwives don't just deliver babies," Monroe says. "I am committed to community-based midwifery movement ... I am constantly educating. When I walk to Fred Meyer I see people, families, I tell the fathers 'You're doing such a good job. How are you?' As midwives, we do outreach 24-7. Historically, midwives did everything. Midwives are childbirth educators. They are doulas. They are breast-feeding educators. This is a triage of professions."
Monroe feels it is her duty as a midwife to ensure that the people she cares for are taking care of themselves and their children.
"Midwives teach peace, we teach self-love and we tell people, 'Pick up your baby, hold your baby.' We care about our young men and we live among the people so we need to be a constant presence in the community," Monroe said.
When she's not ensuring the health of Portland's new mothers and babies; taking care of her own very large family; educating a group of teenaged young women in her Sistah Care program; traveling to Africa to teach and to learn; or training doulas in her North Portland childbirth center, Monroe concentrates on building a new generation of Black midwives for Portland and for Oregon's more rural areas, which are in desperate need of quality healthcare providers.
"We need to build capacity all over the state, to do outreach and empower Black women all over the state," she says. "We want midwives to come here to train and then go back to their communities to work."
Asked if she ever gets exhausted by all that she does, Monroe smiles a warm smile and that look of ecstasy takes over again.
"Sometimes I do," she says, wrapping a flowing white head wrap around her dark hair. But passion for her chosen path keeps her going. As Monroe likes to say – as she must say during those times when the pace of life threatens to bring her down – "Never give up."
For more information about Monroe's International Center for Traditional Childbearing, which offers midwife and doula training; an annual Black midwives and healers conference; the Sistah Care youth program; and other workshops on the history of Black midwives and on the efforts to reduce premature deaths of infants, visit blackmidwives.org, email [email protected], or call 503-460-9324.