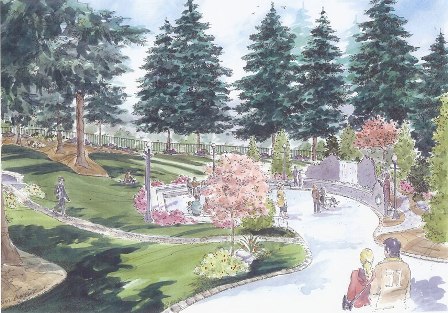 This Wednesday the organization Parents of Murdered Children and Other Survivors of Homicide unveils their new memorial garden in Oregon City with a special event marking National Day of Remembrance for Murder Victims.

The event is Sept. 25, starting at 1 p.m., at the Mountain View Cemetery located at 500 Hilda Street in Oregon City.

The Portland-area chapter of the group has been raising funds and working toward the memorial for almost five years, says supporter Steve Doell from Crime Victims United. Doell says it's only the ninth such dedicated spot in the United States; and is only one in the Pacific Northwest.

"Every year the local chapter of Parents of Murdered Children and Other Survivors of Homicide have an observance, but on this day, it's a particularly special one," Doell said. "It's a beautiful wall – simple and serene," Doell said.

"It will be a beautiful place for anyone who has lost a loved one or child due to homicide," says chapter leader Mary Elledge.

This Wednesday's keynote speaker will be Dan Levey, the national director of Parents of Murdered Children.

Also attending will be Carrie M. Freitag and Margaret J. Kerouac, authors of "The Aftermath of Homicide." Featured guests will be sheriffs, District Attorneys, victim advocates, mayors from different counties throughout Oregon/Washington and other organizations that help victims.

"Look, everyone loses people in this world, because that's the one thing we have in common as human beings – we're all going to die," Doell said. "But when someone is taken from you by another's hands in the crime of murder, there are a lot of other issues in play.

"But this is a special place, this is a place to sit and remember your loved one and all the times of their lives, and of the times they shared with you," Doell said.

Doell says many victims of color are already listed on the wall, but, "unfortunately," he said, there is room for more names.

"If there are people who've had a son or daughter or husband or wife or niece or nephew or close friend – or whoever, remember the name of the organization is Parents of Murdered Children and Other Survivors of Homicide -- if you have someone and you'd like to have their name on the wall, get ahold of the chapter leader for Parents of Murdered Children, with documentation of your case and have your loved one's name put on the wall."

"The good news is that our murder rates are at an almost historic low," Doell said. The year his daughter, Lisa, was murdered by a teenaged driver who deliberately ran her down on a Lake Oswego sidewalk, there were almost 140 murders recorded statewide.