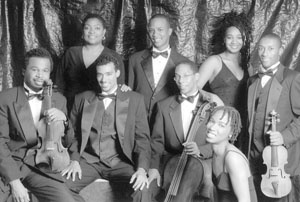 The Young Eight, a critically acclaimed African American string quartet, will end their two-week residencies at three Seattle Public Schools with a concert performance with the students.
The concert takes place at 6 p.m. April 20, at Rainier Beach High School, 8815 Seward Park S. The event is free and open to the public.
The T.T. Minor Violinists, Washington Middle School Orchestra, Meany Middle School Orchestra and The Young Eight will perform a "Night of Strings" including Saint-Georges' "Symphonie Concertante for Two Violins", Vivaldi's "Concerto for Four Violins" and other orchestral pieces.
Founded in 2002 by director Quinton I. Morris at the North Carolina School of the Arts, The Young Eight is the only professional African American classical octet in the world. The group is dedicated to exposing various communities to the arts through classical music and has been recognized in various parts of the country for its dedication to children, music and education. The group's string players hale from the Boston Conservatory, Cleveland School of Music, Indiana University, The Juilliard School, Manhattan School of Music, Mannes College of Music, New England Conservatory of Music and the Peabody Conservatory of Music.
The group visited the schools in October, coaching the students and holding workshops.
The second week of their residence, April 16-20, will culminate in the family night concert.
For more information on The Young Eight, visit www.theyoungeight.com.