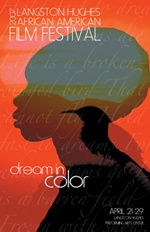 annual African American Film Festival, which kicks off April 21, has them all. "Our goal for each year is to present as wide, and as honest, a variety of portrayals of Black life as possible," Festival Curator Zola Mumfor said. "People of African descent are doing all sorts of interesting things all over the world; why not invite audiences to learn and enjoy?'
Some of the most exciting festival offerings include "Adopted by Aliens," a family-friendly film by identical twins Shawnelle and Shawnee Gibbs that tells the story of a teenager who finds herself thrown into the foster care system, then adopted by aliens from outer space. Another young filmmaker, James Spooner, will present his new work, "White Lies, Black Sheep," which follows his widely acclaimed first film, "AfroPunk."
Seattle filmmakers include Malik Isasis, who will premiere "Naked Life," a drama about relationships, desire, trust and loss, and Nation Son Holmes screening of her narrative drama "Walking on Eggshells." Also on hand is local screenwriter Rosalind Bell with her narrative short "Tootie Pie," a film that addresses class and addiction.
Documentary fans should be pleased with the 26 various African and African American documentaries included in this year's festival.
"The Swenkas" is a quirky narrative that showcases a group of Johannesburg laborers who put a unique spin on dressing up on Saturday night. "Bushman's Secret" follows a traditional healer caught in the new Hoodia-mad pharmaceutical world. Also screening are two documentaries that explore the African gay-lesbian-bisexual-trangendered culture, "Black Beulahs" and "Woubi Cheri." Dan Ollman's "Suffering and Smiling" explores the commitment to social change by Femi Kuti, the son of the legendary musician and political activist Fela Kuti.
The festival's African American documentary lineup doesn't let up. "Darius Goes West" highlights a wheelchair bound 15-year-old who is able to take a cross-country trip thanks to a wheelchair-accessible RV designed by group of young college students. S. Pearl Sharp's will present "The Healing Passage," her thoughtful film about the African American path to healing from the Middle Passage. In a tribute to Seattle's own Octavia Butler, M. Asli Dukan will screen her documentary "Invisible Universe," which features the stories of Black science fiction writers. And Portland based filmmaker David Walker will screen "Macked, Hammered, Shafted and Slaughtered," which explores the Blaxploitation film genre.
Speaking of the 70s, the festival brings to Seattle two men who defined Black cinema in that decade.
Producer, screenwriter and author Sam Greenlee will present "The Spook Who Sat by the Door." This restored 1973 film is often cited as a key inspiration for the current generation of Black filmmakers. And Rudy Ray Moore will top off the event with a retrospective look at his ribald and racy films with an adults-only preview of his new film "Dolemite Explosion."

Closing out the nine-day film festival are Black horse riders from Washington State who will share rodeo and horse stories at a family style picnic to introduce "The Federation of Black Cowboys." This poignant and evocative film reveals how modern-day wranglers use the code of the West to pass down the legacy of Black cowboys to tough Brooklyn youth.
"Langston Hughes the artist and Langston Hughes the building have played a huge part in insisting, cajoling and reminding Seattle and the Northwest that the Black voice is unique and universal at the same time," said Jacqueline Moscou, Langston Hughes Performing Arts Center's artistic director.
For the complete African American Film Festival content and schedule, visit www.langstonblackfilmfest.org or call 206-326-1088. The festival runs April 21-29 at Langston Hughes Performing Arts Center, 104 17th Ave. S. To buy tickets, visit www.brownpapertickets.com.