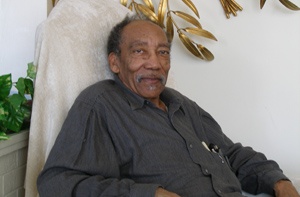 Awoken from his sleep at 1 a.m. on Feb. 22, 1987, Luther Lockett got a call that would save his life. Less than one hour later, the 52-year-old was at OHSU being prepped for a heart transplant – the 25th such transplant ever performed at OHSU.
"Without that heart, I wouldn't be here at all," Lockett said.
Now, 20 years later, Lockett said he's grateful to the man who lost his life, and for the family who agreed to let their loved one become an organ donor.
As a Black man, Lockett knows his chances of receiving a transplant were less than if he had been White.
Right: Luther Lockett
"About 35 percent of people waiting for a kidney are African American," says Mary Jane Hunt, director of Donate Life Northwest.
In addition to being at higher risk for high blood pressure and diabetes, African Americans are less likely to be anatomical donors, said Hunt. Why the discouraging pattern? Hunt said part of the problem is getting education about the need for donors into the community and crushing some long-held myths. Lockett and Hunt both say there is fear that donors would receive inattentive medical care in order to get their organs and tissues. Fortunately, while this might be a fear lodged in historical truth, it is far from true today.
Hunt's group is trying to make it easier for all Oregonians to donate their organs in the event of their death.
On April 2, Donate Life Northwest launched the online registry for individuals to give permission to become anatomical donors.
Despite the "D" placed prominently on a driver's license, families of potential organ donors, many individuals who have been killed in accidents, have had to give permission for their dead loved one to donate tissues, eyes or organs. The new online registry should change that.
The registry – at www.donatelifenw.org – makes it easy for donation organizations to tell surviving family members of your decision. In the past, the donor "D" on a driver's license signaled an individual's intent, but the decision to donate ultimately came down to grieving family members.
Despite some people's misgivings, LaMont Williams said people are pretty liberal with the idea of organ donation in Oregon. Williams needed a new kidney after being diagnosed with a rare kidney disease.
"It was not a concern over ever (finding a matching donor), it was a matter of when," he said.
But when Williams received his transplant in November 2001 – the day before the birth of his oldest daughter – he said it was bittersweet. As the holidays approached – bringing with them a seasonal increase in traffic fatalities — doctors told him the chance a kidney would become available could be soon. Williams' kidney came from a man killed in a car crash.
"It is bittersweet because someone lost a life, but I'm still alive," he said. "It's something I think about four times a day (every time I take anti-rejection medication)."
Another myth Lockett wants to dispel is that a recipient need not be famous or rich. But health insurance sure does help, he says. Kaiser Permanente covered an $80,000 bill for Lockett's heart transplant. The former operations superintendent for Bonneville Power Administration says he was neither rich nor well known – just someone who needed a new heart.
Hunt says some people might think their religion might not support organ donation, but she said all major religions endorse the practice.
Hunt added that the process to sign up is quick and simple, although she said they are unsure how many people will take the time to sign up. A similar registry in Utah saw an initial increase of 23 percent for donations.
Lockett, who is active in his church, works part-time as a tissue courier and speaks regularly to high school students about the importance of becoming a donor, says people need to realize you could be the one to save someone else's life.
"You don't think about these things ever happening to you," he said. "Nobody thinks about a transplant until it happens to you."

Where: www.donatelifenw.org
Who: Oregon, Washington residents
What: Gives organ donation agencies your authorization you want to be a donor after you die.
Why: When you die, your organs, tissues and eyes can help save or improve someone else's life.
How: Go to the Web site, click "Sign up now" and follow the directions.