Local 'Fences' Stars Are Too Busy to Be Nervous 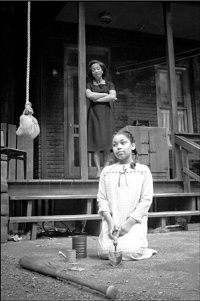 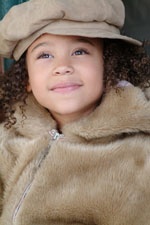 only two of the actors will be able to sleep in their own beds each night.
Ten-year-old Justyce Chaney and 9-year-old Makayla Irvan, both local girls, will rotate the part of Raynell, a sassy youngster whose family is dealing with the racial inequalities of 20th century America.
The rest of the "Fences" cast hales from the Hartford Stage Company and the Dallas Theater Center. "Fences" opens April 13 and runs through May 5 at Portland Center Stage.
So what is it like to work with such seasoned actors?
One week before the play's preview performances, Chaney and Irvan said they were excited – and maybe just a little bit nervous.


"I think it's really fun," says Chaney. "The director's not here yet ... but we've been practicing a lot, doing breathing exercises and trying to project our voices. We hear that the director has a personality inside of him, a little old lady who sits in the back and, if she can't hear you, that's bad!"
The daughter of Adreon Willingham and LaShawn Chaney, Chaney is a fourth-grader at Raleigh Park Elementary and has one sister, Antonia, 7.
Chaney, who has worked with a local Portland talent agency, Murphy Management, for years, is used to being in the limelight – she has been in commercials for Nike, Fred Meyer, the Portland Trailblazers and other local luminaries – but this is her first time on stage.
"I love it. It's a new experience," Chaney says. "I'm not nervous, but I probably will be."
This is Irvan's first time on the big stage too, although the Woodlawn Elementary third-grader says she fell in love with acting last summer, while taking classes at the nonprofit educational organization Self Enhancement Inc.
"I started last summer and my teacher, Miss Laverne Green, asked me if I would be in her masteries class," Irvan says. "The masteries class has a lot of older kids and we do important plays."
The daughter of Kenny and Toi Hopson of Gresham, Irvan has two siblings, sister Candance is 12-year-old and little brother Orray is 5.
Asked if she has any of the sassy, independent character Raynell in her, Irvan smiles and her father, Kenny, cracks up.
"Yes, she does," Kenny says.
"Dad says that I'm willful," Irvan says, smiling at Kenny.
"I'm not patient ... and I like to be the best at whatever I do."
Both girls say they lose themselves when they go into character and that being in "Fences" has encouraged them to keep going with their drama careers.
"This is the first time I've ever had to audition with a script," Chaney says. "But I liked it. I want to keep going with drama. And I also like to dance, especially ballet and hip hop."
Chaney's real goal though is to be the first African American woman president of the United States.
"I would change a lot of things if I was president," Chaney says. 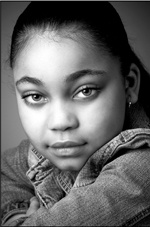 "I would definitely stop the war."
As for Irvan, she sees drama and the fine arts in her future and says she loves to try new things.
"I like roller skating and heights – my mom and I love roller coasters – and I like to sing and dance. I also like to shop, but I go with my dad – he's a better shopper than my mom!" Irvan says, causing Kenny to crack up again.
"I really love acting. I'm a drama queen."
"This is a wonderful experience for her," Kenny says.
"She's always been dramatic and this lets her express herself."

Director: Jonathan Wilson, having worked with August Wilson and his plays for more than 17 years, directs "Fences" on the Gerding Theater at the Armory Main Stage, 128 N.W. 11th Ave., Portland, April 10 through May 6.
Shows: Preview performances run April 10-12. The play's official opening is 7:30 p.m. April 13 and the closing performance is at 2 p.m. May 6. All evening performances take place at 7:30 p.m. while noon Thursday and 2 p.m. Saturday and Sunday matinee
dates also are available.
Cost: Tickets cost $16.50 for ages 30 and younger, Sunday through Thursday evenings. All other tickets cost $28 - $59.50.
Info: For more information, call the PCS Box Office at 503-445-3700 or visit www.pcs.org. "Fences" is the fifth and final production in PCS's 2006/07 Key Private Bank Main Stage Series in the Gerding Theater at the Armory and is supported by sponsor Wieden + Kennedy.