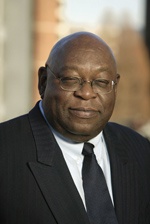 Ten years into his tenure as Portland State University's president, Daniel Bernstine announced Wednesday that he is leaving.
"It's time to explore different opportunities," Bernstine told The Skanner on Wednesday. "I will miss it ... but it's better to leave too early than to leave too late."
Bernstine will leave after PSU's June commencement to take over as president/CEO of the Law School Admissions Council in Newtown, Penn. He has been president of PSU since 1997.
"...President Bernstine's impact on PSU has been enormous and long lasting," said George Pernsteiner, chancellor of the Oregon University System. "...(Bernstine) has helped to make PSU not only Portland's university, but also the university for 25,000 students from across the state, the country and the world."
Bernstine said one of the major challenges when he arrived in Portland was changing the perception that Portland State was not as good of a school as it could be.
"The perception had to catch up with the reality," Bernstine said. "We were a lot better than people perceived us to be, but that has changed and will continue to change. People are beginning to rely on PSU and to see it as a resource."
Among the most notable of Bernstine's accomplishments are his fundraising achievements. The college president helped raise $114 million during his first fundraising campaign and grew the university's research funding from $17 million to $40 million over the past decade.
And, under Bernstine's leadership, PSU saw its largest graduating class last year, with more than 5,000 students receiving degrees and certificates in 2006.
"The proof of (Bernstine's) leadership is clearly seen in the many accomplishments that he and PSU have achieved over the past 10 years," Pernsteiner said. "Dan's heart has always been in access and opportunity for all students, a goal he has surely met as he led the university as its enrollment climbed by more than 7,000 students."
Bernstine has worked hard to bring business to Portland's minority and women-owned businesses and said he always encouraged better diversity at PSU.
"PSU is the most diverse university in the system and I think we've built a campus that is much more diverse than the city," Bernstine said. "We have to continue that momentum and realize that (diversity) is not just about attracting people, but about keeping people."
A California native who moved to Portland in 1997 from his position as Dean of the Law School at University of Wisconsin in Madison, Wis., Bernstine said he's looking forward to living on the East Coast and that one of his missions is to help diversify the country's legal system through his new position as head of the Law School Admissions Council.
Leaving Portland is hard, Bernstine said, but he is confident about PSU's future.
"The future of PSU is extremely bright," he said. "That's part of the reason why it's hard to leave. ... but this has been a great experience and I've gotten great support in Portland. I just hope that the people in this region will continue to see PSU as a valuable asset and will continue to support it."
Pernsteiner said the search for a new PSU president will "begin as soon as possible." Bernstine will remain at PSU through the school's commencement on June 16.