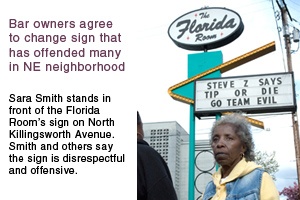 After months of letter writing, name-calling and hurt feelings, the simmering controversy over one North Portland business' sign may be cooling down.
Patty Earley, co-owner of The Florida Room at 435 N. Killingsworth Ave., says she will soon take down the "Church of the Bloody Mary" slogan that seems to have offended so many in the Black community.
"To me, this started off as a free speech issue, but it seems to have turned into a cultural issue," Earley said. "I want to be culturally sensitive, so I will take down the word 'church.'"
The Florida Room's sign, which reads "Church of the Bloody Mary" on one side and "Go Team Evil" on the other, has been called "insensitive, inappropriate and offensive" by many people in North Portland's African American community.
"It's not cool," 16-year-old Michael Peterson, a student at nearby Jefferson High School, said as he passed under the Florida Room sign earlier this week.
"It's mixing the Lord with a drink. I don't like it," said Peterson's friend, 17-year-old Andre Green, also a Jefferson student. "It should say 'House of the Bloody Mary' instead."
Lesia Ali, who has lived in the area for more than 40 years, and her aunt Sara Smith, 70, who has been in North Portland since the 1960s, said the sign goes against the tradition of North Portland's church-going Black community.
"We find this advertisement ... insensitive to the history and tradition of the community," Ali and Smith wrote in a letter addressed to the bar's owners. "This advertisement is disrespectful to the churches and families in the community. It is not consistent with the traditions and history of our community."
Ali and Smith said they hoped that, once the owners realized they were offending longtime members of the North Portland community, they would change the sign.
Instead, the sign remained and Ali and Smith, who wrote to the Florida room owners in mid-March, didn't hear a word from Earley or her business associates, Mike Hanson and Susy Day.
"We haven't gotten back to them yet," Earley said Tuesday. "But it's very hard to respond ... I feel like when we explained to them before (that the sign was meant to be humorous and that the old slogan, "Sin all the damn time" referred to the bar's frequent "service industry night") they didn't care," Earley said.
Ali, Smith and others who say they're offended by the sign's language — including Nancy Clark, president of the Humboldt Neighborhood Association, who confronted Earley at a recent association meeting — said they weren't swayed by Earley's explanations.
"They said they were here to fix up the area," Smith said. "Well, there's never been a sign like that ever before in this area. It's not right for them to move into this area and put up a sign that is so offensive – they're right across the street from a library, from churches and schools ... it's just not right."
But inside the Florida Room, Earley insists she didn't mean to offend anyone with the sign. At 4 p.m. on a weekday, the atmosphere inside the year-old Florida Room is jovial. Earley, who has owned a home in inner Northeast Portland off Alberta Street for more than 13 years knows nearly every customer by name. She evens knows their favorite drink. Pressed by a visitor to share their thoughts on the Florida Room's sign, most patrons say they think it's humorous and that they get the inside jokes.
"I have a petition signed by 100 patrons, many of whom live in the neighborhood, supporting (the sign)," Earley said. "The way I look at it, this is a case of bar culture versus church culture."
Earley said she tries to be sensitive to the history of the community – and that her business supports other local groups like Ethos, a nonprofit that helps young musicians and is located less than four blocks east of the Florida Room – but that she can't guarantee that her sign won't offend someone else.
"The sign will change and I won't reference the church, but we can't guarantee that our sign won't offend someone else (in the future)," she said.