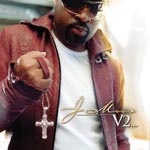 A stunning follow-up to a solid debut album, "V2" is the sophomore album from one of music's brightest rising stars. J. Moss is taking contemporary gospel music to new heights with his brilliant, staggering falsetto soaring over upbeat jams, reassuring ballads and introspective anthems on a disc of track-to-track hits.
"I've beefed up everything on 'V2'," says Moss. "My vocal chops, my dancing chops, my ministry chops; I wanted the intensity to be double what my last album was and definitely wanted to show growth, and I want people who listen to my music to be able to grow along with me."
Some "V2" highlights include the electrifying "Jump Jump," featuring label mates 21:03 and Moss' cousin Kierra "Kiki" Sheard; the infectious "Dance," featuring Kirk Franklin; the celebratory "We Love You — The LIVE Remix," featuring Byron Cage and Marvin Winans; and the powerful "I'm Not Perfect," featuring Anthony Hamilton.
But Moss stuns when flying solo on tracks such as the robust "Praise on the Inside"; the reflective "Holding On"; the soulful everyman's anthem "Let It Go" and the heartwarming "Nobody," where he reassures, "Nobody is a nobody/God doesn't make mistakes … We all may fall/Some may stall/But all in all/God doesn't make mistakes."
"V2" is sure to be one of the best album releases of 2007, and it cements J. Moss as a vibrant and necessary artistic bridge between urban R&B and gospel music.