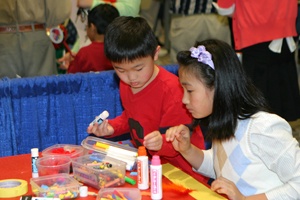 The sixth annual Multicultural Family Fair will be held April 7 from noon to 4 p.m. at the Lynwood Convention Center, 3711 196th St. S.W.
Volunteers from South Snohomish County will set up more than 35 booths to share information about their culture though interactive displays of personal artifacts including traditional costumes, photos, flags, maps and artwork.
Arts and craft activities, such as Chinese calligraphy and quilting by the Northwest African American quilters, will give fair-goers the opportunity to try and create their very own piece of another culture, which they can take home with them. Students from Edmonds Community College's Culinary Arts program will demonstrate cooking techniques from around the world and provide free samples and recipes.
Featured performers include the Kathak North Indian Dancers, Bochine Steve Mostovoy percussion group, Daniel and Some Super Friends dance troupe, guitarist Enrique Henao and The Cape Fox Dancers.
"What is new and very important is that this event has become an official city of Lynwood signature event. Funding — $20,000 over two years — for the Multicultural Family Fair has been written into the city budget under the umbrella of the Diversity and Neighborhood Commission," said Pam Graham, program coordinator of the Family Support Center of South Snohomish County and event organizer. "This demonstrates, in a very tangible and meaningful way, the commitment by the city to engage all the residents of South Snohomish County in actions that promote cultural and ethnic awareness, and the creation of a more inclusive community."
The Multicultural Family Fair is the direct result of the efforts of the Family Support Center parenting group for biracial families. The first fair was held in 2002 and drew 450 participants. Last year's fair drew more than 2,500 people at the Lynwood Convention Center.