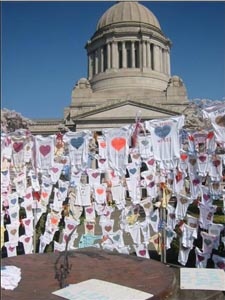 About 300 baby onesies were strung up
at the Capitol Building in Olympia last
week, in support of a senate bill
that would provide $250 a week for
workers caring for a new baby or a
seriously ill relative.

OLYMPIA, Wash. — When Selena Allen's son was born a month premature in 2003 she faced a painful choice — spend her limited paid leave watching her son recover in the hospital or wait until he returned home. Allen and her husband decided that she would return to work right away, and take the time once he was released. "We decided it was more important to be with my son once he came home so we could establish our routine together and bond, rather than me sitting at the hospital," she said. "It was a very difficult decision."Allen has joined with a coalition of mothers and their supporters to push for a proposal in Washington state, Senate Bill 5659, that would give workers five weeks of paid family leave — at $250 a week — to care for a new baby or a seriously ill relative. The measure has drawn the ire of business groups, who call it unnecessary for businesses that already offer employees flexible leave options."We believe that employers have the responsibility to provide that kind of leave to their folks and have good benefits, period," said Don Brunell, president of the Association of Washington Business. "But we don't encourage them to rely upon state programs." But Allen said that if such a program had existed for her, "I could have spent my eight hours a day with my child, not trying to pretend to be productive at work." "It would have meant better bonding with my son, it would have meant less stress and emotional fatigue for myself," she said. Allen is one of about 6,000 Washington state members of MomsRising.org, a new national women's advocacy group whose symbol is "Rosie the Riveter" holding a baby. The group has sent more than 4,000 e-mails to lawmakers, and some, wearing the group's "Rosie" T-shirts, recently held a rally at the Capitol where they strung up more than 300 baby onesies with messages supporting the measure."We are in for a very big fight," Senate Majority Leader Lisa Brown, D-Spokane, told MomsRising supporters. "This is a national issue. Washington state, in paving the way here, will be the center of the battleground."If it passes, Washington would join California as the only two states with paid family leave laws. New Jersey, Texas and Oregon are considering similar laws, according to the Washington, D.C.-based National Partnership for Women & Families. Under the measure being considered in Washington state, paid leave would take effect in 2009, with weekly payments initially at $250 for full-time workers, with automatic increases for inflation. The money would come from a 2-cents-an-hour tax on employees. Employees of companies with 25 or fewer employees wouldn't be guaranteed their jobs would still be there when they got back. "This type of policy is absolutely critical to putting our resources where our mouth has been on family values," said Kristin Rowe-Finkbeiner of Kirkland, the group's co-founder. Opponents argue the program creates a new tax and a new bureaucracy with ever-increasing costs. "It's not going to stay at $250 a week and it's not going to stay at 2 cents an hour," said Rep. Cary Condotta, R-East Wenatchee, and owner of a motorsports company. "You're going to have $500 a week, 4 cents an hour. It simply doesn't make any economic sense." The state Office of Financial Management figures more than 80 new state workers would be needed to handle the program. The provision that lets small companies replace workers who take leave was inserted to cushion the impact on small businesses. But Judy Coovert, who has 14 employees at Printcom, Inc. in Burien, is still concerned. "There is a desperate need for balance between people's work lives and their family lives," said Coovert, co-owner of the company that manufactures and distributes printing and corporate marketing material. "We've done that ourselves and achieved that balance. We've done that without government mandate." Nearly $200 million would be collected by 2013, with more than $150 million paid out in benefits. Supporters have been trying to get paid family leave through the Legislature since 2001. Two years ago it passed the Senate but died in the House. This year it passed the Senate again and awaits action in the House. House Speaker Frank Chopp calls the measure "the right thing to do.""It will make a huge difference in family dynamics," said Chopp, D-Seattle. Chopp, who wouldn't guarantee that the measure would come up for a vote, said he's talking with the Senate and Gov. Chris Gregoire over possible changes to the bill, including a provision to send it before voters in November. Gregoire has expressed support for the idea in the past, but spokeswoman Holly Armstrong said she wants to see the final product before deciding whether to sign it. Under federal law, paid leave is not required, but businesses with 50 or more employees must give workers up to 12 weeks of unpaid medical leave per year for themselves or to take care of an ailing relative. Under the Washington state proposal, to take the leave, workers would have had to have worked 680 hours for their company to qualify; to be automatically reinstated, they would have to have worked for a full year and at least 1,250 hours at an employer with more than 25 employees. "It's such common sense that it's just puzzling to me that the professional business groups have been so unyielding," said Sen. Karen Keiser, D-Kent, who was named New Democrat of the Week in March by the Democratic Leadership Council for her work on the measure. Small business owner Dolores Gohndrone said she likes the measure because it offers what she can't afford to. "Giving them the time, we can work with that. But to give them the financial part of it is a very huge burden on the small businesses," said Gohndrone, the owner of Hallmark Services Inc. in Seattle, a staffing company. "For the companies that would love to let their employees take time off, it enhances that." —The Associated Press