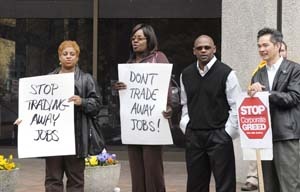 Roy Jay, president of the African American Chamber of Commerce, says the recent Freightliner layoffs will have huge economic impacts on the African American community.
"This is all about economics for (Freightliner)," he said. "But this impacts an entire community."
Freightliner ceased production of its main truck line last Friday, laying off 800 workers in the process, with plans to move production closer to the Midwest.
The domino effect of the layoffs, Jay says, will be evident in the loss of money flowing to surrounding support businesses – corner markets, barbershops, lunch counters, flower shops. But aside from being concerned about the effect on small businesses, Jay says he also is concerned about those workers who were close to retirement.
"If they're over 50, unfortunately America says we really don't have any positions for you," he says.
Equating the layoffs to changes in the timber industry, Jay says many longtime workers will have a near impossible time learning brand new skills in a classroom.
Sharon Richie is one such worker.
After living through three different layoffs, Richie thought she might finally be able to retire from Freightliner. Unfortunately for her, the third time was not the charm.
"I thought I was secure," the 47-year-old Northeast Portland resident says. "I was in disbelief. I thought I'd work there until I retired because of the Western Star brand and military truck contracts."
That dream died last week, as the last Freightliner brand truck rolled off the Swan Island plant's assembly line in Portland.
With future assembly destined to take place in North Carolina and out of the United States, where Freightliner is constructing a $300 million plant that will produce 30,000 trucks annually and employ 1,600 workers in Saltillo, Mexico, the company decided to lay off more than 800 Portland workers last week.
Freightliner has made trucks, and employed thousands of blue and white-collar workers, in Portland since 1942. The company will continue to make the Western Star truck line – a higher end product – and hope to snag a military contract for trucks with detachable armor, which would also be constructed in Portland and could bring back several hundred of the laid-off workers. 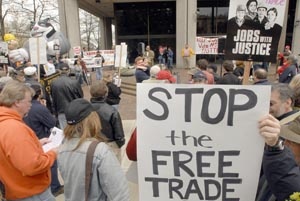 No one knows how large an impact the manufacturer's layoffs will take on businesses in Portland and surrounding areas, but business representative Joe Kear, of Machinists Union 1005, says he doesn't know if manufacturers in Portland will be able to absorb the large number of workers suddenly hitting the job market.
"I'm happy to see a number of employers in a hiring mode," says Kear, admitting many workers might have to look in other cities for work or change skill sets.
Kear represents 630 of the laid-off workers, some of whom were close to retirement. According to Kear, about half of the laid-off workers are over the age of 36, and 19 percent are ages 56 to 60. Half of those laid off had 10 years or more experience at the plant, and the vast majority — 91 percent — are men.
At a job fair held last week, 31 employers, including large employers such as Boeing, turned out to talk to former Freightliner employees. Laid-off workers can receive up to $30,000 in tuition reimbursement for job training, two years of unemployment insurance, and medical insurance that is reimbursed up to 65 percent of the cost. But will all this be enough to make up for jobs that paid up to $21 an hour?
Richie worries that she won't be able to keep up her current way of life. Working in the finished cab portion of the assembly line, Richie assembled slide bars, and installed utility lights, exhaust vents and other finishing touches. She was making $20 an hour before her third layoff. When Freightliner took her back on, Richie took a major hit in pay — down to $14 an hour.
"I didn't have enough money," she says. "I had to take jobs making below what I was used to making."
Because of that, Richie says she was forced to file for bankruptcy. Just when she was beginning to get back on her feet, she received notice that she would have to find work elsewhere.
"I'm back to square one," Richie says.
Another worker, Morris Price, 46, says he doesn't know what kind of work he will pursue – a sentiment shared by almost all of his coworkers. The 10-year Freightliner veteran said he wants to get back to work as soon as possible, and hopes the company will hire him back if production on the Western Star line – a line he has worked on in the past – increases. He does plan to go back to school and knows something positive can come of this.
"Tough times don't last forever," Price says. "Tough people do."
In addition to the Freightliner employees now out of work, local vendors also are losing business. Kear said companies providing parts for Freightliner trucks – Consolidated Metals in Portland; Commercial Vehicles Group in Stevenson, Wash.; Paramount Manufacturing in Tualatin; and several others – have experienced a downturn in business that could turn into layoffs.
"It's pretty dramatic," says Nels Lewis, owner of Tualatin's Paramount Manufacturing. "We knew it was coming. … We've since expanded into other markets."
Lewis' company produces mattresses for Freightliner's sleeper cabs. He said the company initially laid off 11 of their 50 workers, but has since rehired all of them. Freightliner's move forced Lewis to expand his customer base faster than expected, not necessarily a bad thing in an industry that experiences its ups and downs, said Lewis, but, "I would rather it didn't happen. We've been with them for many years."
What hurts Richie and other laid-off workers the most is that their jobs are not being lost because of normal market conditions. Many of these jobs are being transferred to Mexico because of the cheap labor and free trade agreements. The remaining truck line – Western Star – represents only about 1 percent of the commercial truck market.
"Why would you take Freightliner from its home?" asks Price, who says his co- workers are bitter about all the jobs being moved south of the border. "They take our trucks and send 'em to Mexico."