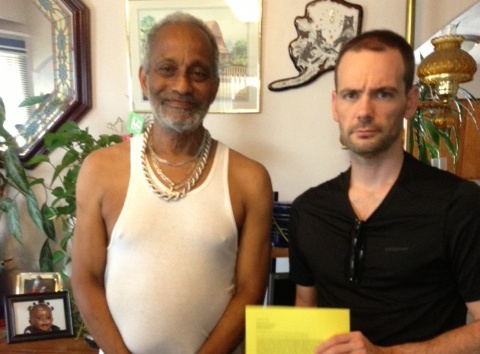 From left, Michael McEldery and attorney Michael Fuller. McEldery is suing Nationstar Mortgage for violating a court order regarding mortgage payments it collected under false pretences after his home went into foreclosure

RealtyTrac reported last week that Oregon is the second hottest spot in the nation for home foreclosure.

And as The Skanner News went to press this week, the national Consumer Financial Protection Bureau issued a report faulting mortgage servicing processes – and calling out Attorney General Eric Holder for not doing enough for consumers.

That's no surprise to Northeast residents Michael and Judy McEldery, who are getting ready to fight an unusually sticky court battle over the North Portland home that has been in their family for 50 years.

Their lawyer says the case involves clear evidence of fraud by Nationstar Mortgage, the servicing company that bought McElderys' mortgage after it was resold several times.

"This case reveals a corporate system that's not governed by sound policies or individual decision-making. Nationstar's conduct in this case appears solely motivated by the prospect of maximizing profitability and market share," the McElderys attorney Mike Fuller says. "And the law is on their side most of the time."

While many critics blame defaulted homeowners for creating their own financial problems, the issue of mortgage fraud, detailed in a recent FBI report touches many homeowners in crisis.

And the FHA has paid out some $12 billion in claims now considered fraudulent by the U.S. Department of Justice.

Nationstar Mortgage's Portland-based attorney did not return a request for comment.

It Started with Repairs

For the McElderys, it all began several years ago when they moved back to Portland to take care of Judith's mother, who had Alzheimer's. To make ends meet Judith started caring for children in her mother's 106-year-old house.

The family home had long been paid off, but, Judith says, they landed into the home loan market after a disgruntled ex-family member complained to the City of Portland that the building needed repairs.

So McEldery borrowed money for the repairs, landing his family in the hands of a chain of mortgage companies that started with World Savings and ended with Nationstar.

"I don't know if World Savings went out of business or what happened," Judy says. "Anyway, our lender started changing, and it went to two other companies before Nationstar got it.

"You can't keep up -- all of a sudden you got a letter from a different company that says they have your mortgage. And nobody is telling you anything."

Somehow the situation worsened no matter what the McElderys did.

"They said the mortgage would go up once a year," she says. "Our mortgage was going up every ninety days."

When Judith called the "Homeowners HOPE Hotline" phone number for the federal Department of Housing and Urban Development listed at the bottom of each bill, nothing happened.

"It took awhile but I did end up talking to a person," she says. "They told me that I could dispute them and attempt to fight them but that was all on me."

By September of 2012, the McElderys were sliding into default and could no longer make their mortgage payment.

It's hard to overstate the federal government's disarray in trying to crack down on fraud by the corporate sector in the home mortgage industry.

The National Mortgage Settlement, hammered out this year between the state attorneys general, HUD and the nation's five largest mortgage servicers (JPMorgan Chase, Wells Fargo, Bank of America, Citigroup and Ally Financial) required the companies to pay a combined total of $25 billion to resolve claims stemming from illegal foreclosure practices. It also allowed them to pay $225 million to be released from added liability under the federal False Claims Act.

But Wednesday's mortgage fraud report from the federal consumer bureau lists three main areas where corporate practices are still not living up to state and federal legal standards: http://files.consumerfinance.gov/f/201308_cfpb_supervisory-highlights_august.pdf

--Sloppy account transfers, with disorganized and unlabeled paperwork, including important foreclosure documents; failures by mortgage servicers to tell consumers when the servicing of the loan is transferred to another company;

-- Foreclosure processing mistakes, including inconsistent communications with borrowers; waiving certain fees and interest charges for some borrowers but not others; long application review periods; incomplete loan files, making it hard for consumers to find out about their loan modification applications when they call the servicer for help.

In January 2013, Nationstar offered the McElderys a deal: If they agreed to pay a reduced amount for three months, they could stay in their home and modify the mortgage.

They took the offer and started sending checks; after a couple of months, Nationstar claimed they never received the second payment.

At the same time they were negotiating on the phone with Nationstar -- and even sending more payments -- the company had already started the foreclosure process.

In June of this year, Nationstar literally demanded payments from the McElderys while at the same time returning one.

"Enclosed you will find we are returning the funds you have submitted on your account that were insufficient to resolve your delinquency," the letter from Nationstar's "Loss Mitigation Department" says. "At this time, we are continuing with our collection efforts."

Judith McEldery says a Nationstar staffer told her on the phone that perhaps the lost check had been deposited in somebody else's account; the copy of the cashed check returned to the couple includes an endorsement on the back with a complete stranger's name.

"What's uncommon is that after Nationstar initiated foreclosure, started to kick the McElderys out of their home, they went and found the payment that was allegedly missing all along, and even collected payments that were sent by the McElderys in good faith after the three month period ended.

In her letter to Holder on Wednesday, Warren wrote that the $225 million that the five mortgage servicing companies paid in fines represented only .6 percent of the 92,735 fraudulent mortgage claims they made, the value of which totaled over $12 billion.

Further, Warren asks Holder to explain how his department came up with the $225 million settlement figure; she requests copies of any research by the DOJ on how much the fraud actually cost the government and consumers; "any other documents that relate to DOJ's decision to accept the $225 million payment as a release from False Claims Act liability;" and a statement certifying how much of the fines paid by the mortgage companies has been deposited in the FHA's Capital Reserve Fund so far and how much will be deposited there once the fines are paid off.

The National Mortgage Settlement only impacted homeowners with foreclosures from 2008-2011; the amount each qualifying homeowner received is pennies on the dollar – or even less, if that's possible.

"Unfortunately, these checks will do very little to soothe the financial pain of these households, which were much more likely to be households of color," the Greenlining Institute's economic equity blogger Kevin Hill wrote this week. "That's because the checks are approximately $1,480 according to the official settlement website.

"That won't even begin to repair the damage done to those who lost their homes during the housing crisis and were forced to find other places to live.

"Frankly, the amount is so small it seems to be more of an insult to the victims of the housing crisis than anything else," Hill wrote.

As for the Consumer Financial Protection Bureau, Warren appears to be gearing up for a fight.

"First, I am troubled because I believe there needs to be a clearer and more public accounting of the damages that FHA incurred from the servicers' fraudulent conduct," she wrote to Holder.

"Second, and more broadly, I am concerned that this might be yet another example of the federal government's timid enforcement strategy against the nation's largest institutions."