By Helen Silvis of The Skanner News
Published: 20 August 2013 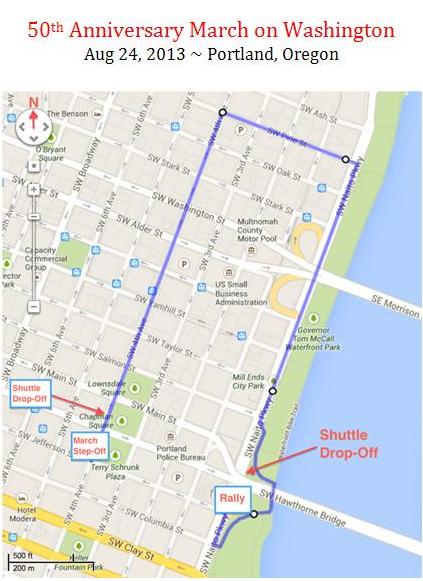 Events to commemorate the 50th Anniversary of the historic March on Washington on Aug. 24,  are underway in Washington and around the country.  Rev. Al Sharpton, Martin Luther King III, and the families of Emmett Till and Trayvon Martin are among the speakers at Washington DC's "Realize the Dream," rally.

Portland is holding Redeem the Dream, the regional march for civil rights advocates in the Northwest. Scroll down for the program or click here to see why the same issues still matter.

The Albina Ministerial Alliance for Justice and Police Reform has raised more than $8,000 so far. Additional donations will be needed to fund the buses and permits.

Other donations include a supply of drinking water donated by New Seasons markets, walkie talkies and garbage cans, donated by Recycle Portland. Volunteers have come forward to handle security, and members of the National Lawyers Guild wearing bright green hats, will be among the crowd to document any incidents that occur. Still needed?  Volunteer lawyers, march monitors, doctors, nurses, or other medical staff should call Mike at 503 267 3192.

Speakers, musicians and spoken word artists for the event are still being finalized, but they will include youth and elders. JoAnn Hardesty will be emcee.

9 to 9:45 a.m. Silent Vigil for Human Rights at the Bill of Rights Park, Waterfront Park

10a.m., at Terry Schrunk Plaza before heading to Waterfront Park.

The march will proceed along SW 4th Avenue, moving north, to SW Pine Street.  From there, marchers will move toward the Willamette River, to SW Naito Parkway.  Walking south on Naito Parkway, the march will end at The Bowl, just beyond the Hawthorne Bridge.

1p.m. The rally will begin at the same time as the national event in Washington DC. Confirmed speakers include: Sen. Jeff Merkley, Governor Kitzhaber and Oregon Attorney General Ellen Rosenblum. Check our website for the full list of speakers, spoken word artists and musicians.

Check back for more information.