By Helen Silvis of The Skanner News
Published: 20 August 2013

Wyden said reducing costs by improving prevention and coordinating care is an important goal that will benefit the economy for the long term.

"This fall we'll see some dramatic changes so that health care isn't just for the healthy and wealthy," he said.

"Everything that goes on from the time the Affordable Care Act kicks in will be to put a new focus on prevention. It's not any longer just about sick care."


Wyden said he plans to push for a rule change that will allow Medicare to negotiate for lower medication costs. Right now, he said, the rules don't allow that.

Anyone already on Medicaid, Medicare or the Oregon Health Plan, won't have to do anything to continue getting their healthcare.  But about 200,000 more people across the state – families with incomes at or below 138 percent of the federal poverty level— will be eligible for free care through the Oregon Health Plan.

Another 400,000, families with incomes below 400 percent of the poverty level, will be able to get financial help through tax credits. The credits can be paid monthly to your insurer or taken at the end of the year.

Multnomah County serves 70,000 people in its community and school-based clinics, and expects to serve 50,000 more people who will qualify for the Oregon Health Plan under Obamacare. 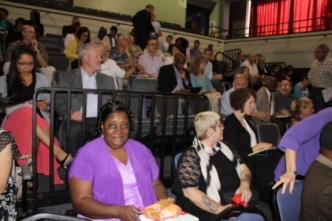 You can find out if you qualify for help online at the Cover Oregon website, which includes a calculator. In Washington you will find the same information at the Washington Health Benefit Exchange. Both sites offer cost and plan comparisons and information about how to sign up.

For the first few weeks Oregonians can sign up through a community partner. The Urban League, the African American Health Coalition, Oregon Latino Health Coalition, are just three of a long list of partners who are trained to help.

Around mid-October, says Amy Fauver of Cover Oregon, those who want to sign up online will be able to do so.

"We're testing the systems now and we want to make sure our customers have the best experience possible," Fauver said. "Starting out by working with our partners to identify any technical issues is the best way we can achieve this."

The law says that next year everyone must buy health care or pay a penalty. In 2014 the penalty will be $95 or 1 percent of your income. The penalty will rise in 2015.


Wyden said one of the most important advances in the new law is that it ended discrimination against people with an existing health problem.

"Probably the biggest ripoff was the discrimination against people with pre-existing conditions," Wyden said. "That's just plain old immoral to have a country as good strong and rich as ours to say it was legal for an insurance company to beat the stuffing out of you if you had a pre-existing condition. This law has made that illegal."

Commissioner Smith said she understands the importance of that change because she personally has benefited. A year ago Smith was treated for a brain tumor, she said.

"I f we did not have this, I would not be able to change employers and get insurance because I have a pre-existing condition,"

Wyden said he helped build a provision into the law will allow states to get a waiver to set up a single payor system by 2017.

"I'm trying to get that sped up, because I don't think all the wisdom is in Washington DC," he said.

Wyden also said he will advocate for all licensed health professionals, including alternative providers, to be part of the health care system.