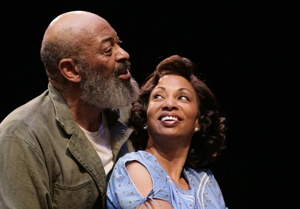 Wendell Wright as Troy Maxson and
Wandachristine as Rose in "Fences"

Portland Center Stage, in collaboration with Hartford Stage Company and Dallas Theater Center, presents August Wilson's "Fences" April 10 through May 5.
Winner of both the Pulitzer Prize for drama and the Tony Award for best play in 1987, "Fences" stands toe-to-toe with plays like "Death of a Salesman" as both a snapshot of a troubling time in American history and an epic portrayal of the human condition, but "Fences" is told from an African American perspective.
Troy Maxson never had it easy as a Black man in early 20th century America. When he joined the Negro Baseball Leagues, straight out of prison, he always thought it would be a short stop on the way to the Majors. That break never came and now, in the late 1950's, instead of living on a big league pension, he's living the life of a big city garbage man. Though parts of him are obviously broken, Troy stands strong and tall and runs his household with an unwavering credo and a firm hand. His son, Cory, is a promising young football player with a scholarship offer on the table, but Troy is hearing none of it.
This is the backdrop for a classic father/son drama, which is further intensified by the pervasive taint of racial inequality, never far below the surface in this play.  In addition, Fences offers a strikingly genuine portrait of an aging and imperfect man greeting the end of his days with none of the fame he always anticipated and little of the money he always wanted but a love for life as big as the world itself and as much humanity as one can imagine.
Jonathan Wilson, having worked with August Wilson and his plays for more than 17 years, directs Fences on the Gerding Theater at the Armory Main Stage, 128 N.W. 11th Ave.
Opening is 7:30 p.m. April 13 and the closing performance is at 2 p.m. May 6.
Tickets cost $16.50 for ages 30 and younger, Sunday through Thursday evenings. All other tickets cost $28 - $59.50.
For more information, call the PCS Box Office at 503-445-3700 or visit www.pcs.org.


Fund-raiser to precede showing of "Fences"
The Rev. Renee' Ward, along with The Susan G. Komen Foundation – Oregon & Washington Affiliate, International Center for Traditional Childbearing and other community partners, will host the annual "It's About You: Self-Care through Self-Discovery" fund-raiser, a breast cancer education and outreach campaign for African American women in the Portland/Vancouver metro area, at 6 p.m. April 17.
The inaugural celebration will precede Portland Center Stage's production of "Fences", the Pulitzer-prize winning play written by the late August Wilson showing at the Gerding Theater (formerly The Armory) — Portland Center Stage's brand new home — at 128 N.W. 11th Ave.
Proceeds will benefit African American Women for Breast Cancer Awareness, Prevention and Education. VIP tickets are available for purchase through the PCS' ticket office by calling 503-445-3700