By Helen Silvis of The Skanner News
Published: 13 August 2013 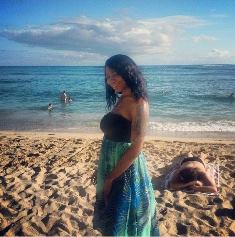 Friends and family of Ivanice Harris, found dead in Oahu May 20, are holding a march in Portland August 17, to push for justice in the case.

Marchers will leave the East side of the Hawthorne Bridge at noon, and head across the river to the Justice Center and City Hall. They are distributing flyers asking for public support. Friends in Las Vegas and Hawaii are also planning actions, says Andre Miller a longtime friend of Harris.

Hawaii police are investigating Harris' death as a murder. In June, police arrested Marine Master Sgt. Nathaniel Cosby, the last known person to have seen her. But 48 hours later, on June 5, Cosby was released.  Police said they did not have enough evidence to charge him.

"We want to show support to Ivy's family and make sure the military don't shove this under the rug," Miller said. "What's really bad is that this man is a marine, someone who is supposed to protect us."

Harris was in Hawaii to celebrate her 29th birthday with her boyfriend, Mark Miles, the Portland-based rapper also known as Meezilini, and a woman friend. But she also worked as an escort and disappeared from Waikiki May 16 after meeting a client. Her naked body was found four days later next to the Farrington Highway near Yokohama Bay, about 40 miles north of where she was last seen.

Miller says that Harris was an independent person who chose to work as an escort for a short time, so she could make some money. She had plans to quit and go to school.

"She was signed up for classes in September at Mt. Hood Community College," Miller said. "Now, it's been three months since her murder, and we want the investigators to know people are watching and we care. No matter what Ivy was doing, she was a good person and a lot of people cared about her."

The Navy Criminal Investigative Service, known as NCIS, took the lead in the investigation in late June and plans to prosecute the case through military courts. Chuck Little, deputy director of public affairs for the Marine Corps base in Hawaii, said the investigation is continuing and Cosby remains a suspect.  Little said the next step is an Article 32 hearing.  "An article 32 hearing is roughly the equivalent of a grand jury," Little told The Skanner News.   "The purpose is to determine if there is enough evidence to move forward with a court martial."

Cosby, 38, has admitted spending the night with Harris in a hotel, but denies he killed her. Police identified Cosby as a suspect after seeing surveillance camera footage of him with Harris the night she disappeared. The cameras also caught him the next morning struggling to carry a heavy suitcase. The suitcase was investigated for DNA. At that time, according to Hawaii News Now, Cosby refused to take a lie detector test.

The Honolulu Medical Examiner could not identify a cause of death for Harris, saying her body was too decomposed. Her family say she had just discovered she was pregnant.

Hawaii News Now reports that Cosby is a bomb technician, based in Japan. He has served since 1998, with deployments in Iraq and Afghanistan. His last combat tour was in 2011. Cosby currently is on the Marine base. He is temporarily assigned to an aircraft unit in Hawaii.