In the seven weeks since it opened, Nurse Practitioner Shelda Holmes' new Hands On Medicine clinic has attracted a following of North and Northeast Portland's most underserved residents.
For Holmes, it is a dream come true.
"My passion is in serving the underserved," Holmes says. 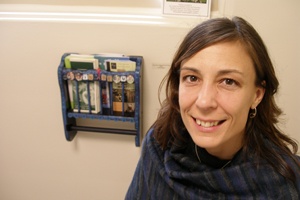 In former jobs, Holmes sometimes saw more than 24 patients each day, and had barely 10 minutes per person to diagnose and treat their problems.
"How can you treat someone in 10 minutes?" she says. "It's not fair to the doctors and it's not fair to the patients."
Holmes, who works on health care-related policy issues throughout Oregon, says she believes one of the reasons behind the state's current nursing shortage is that nurses can't treat patients the way they want to in such a tightly controlled, time-crunched environment, so they opt out of the profession.
This was the reason for Holmes' move as well.
After years of working as a floor nurse and in hemoncology at Oregon Health Sciences University, Holmes opened her own practice, Hands On Medicine, a clinic situated one block south of Killingsworth Avenue at 5311 N. Vancouver Ave., in early February.
"My mission is to treat families in the most sustainable way possible (Holmes has purchased sterile cleaning equipment to reuse all the medical supplies she can, making exceptions for non-reusable items such as needles) and I'm committed to spending 30 minutes with each patient," she says.
Holmes is one of five primary care providers currently accepting Care Oregon patients, and the majority of her patients are Medicaid clients.
The reimbursement rates for Care Oregon and Medicaid aren't great, Holmes says.
"I just billed Care Oregon for $2,300 and they sent me an $800 check. This is the only industry in the world where a company can say, 'OK, we'll pay you 30 percent of the bill and there's nothing you can do about it.' If I'm lucky, I'll resubmit and they'll send me another $200."
About 70 percent of the patients coming to Hands On Medicine are people of color and the majority of them live close by.
"I've had people stop in who were just walking by, and they say, 'Oh, do you take my insurance because you're so much closer than my (current provider),'" Holmes says.
And for the uninsured, cash-paying folks out there – and Holmes sees a lot of them – she offers a 25 percent discount.
Although Holmes is a nurse practitioner, which means she can do most of the things a regular medical doctor can do, including writing prescriptions, doing well-baby check-ups, and prenatal care up to 25 weeks, she also wanted to offer a few alternative, complimentary treatments at Hands On Medicine. The clinic employs one licensed massage therapist – David Imeson has more than 10 years experience in Swedish massage and is offering a "new patient special" right now of $40 for a one-hour massage.
In April, Hands On will offer acupuncture; and Holmes has set aside a room for educational seminars on topics like diabetes and high blood pressure.
One other feature that makes Hands On Medicine stand out is the use of local art to brighten the walls, children's exam room and reception area. Holmes has found three local artists to decorate the clinic for its grand opening on March 29 and plans to rotate artists every few months.
"It connects us to the community," she says. "And I think there's a connection between art and healing."