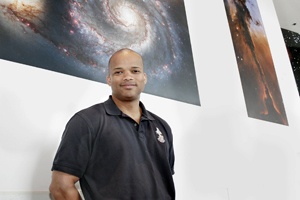 Astronaut and U.S. Navy Capt. Robert Curbeam Jr., pauses in front of a "final frontier" display at the Oregon Museum of Science and Industry March 28, after a tour of OMSI and lunch with the museum's board of directors.
After serving as an officer with the U.S. Navy throughout the 1980s and early 1990s, Curbeam joined NASA in 1994. He is a veteran of two space flights, has logged 593 hours in space and been on three spacewalks. Curbeam and fellow astronaut Mark Polansky met with Gov. Ted Kulongoski and discussed their flights at a Rotary Club luncheon in Portland earlier this week.