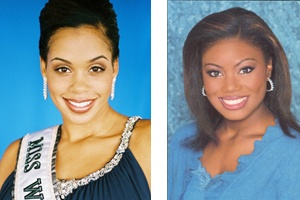 Leilani Jones of Washington and Sharitha McKenzie of Oregon

Of the eight African American women competing in this year's Miss USA Pageant, two of them are from the Pacific Northwest. Miss Washington USA Leilani Jones of Tacoma and Miss Oregon USA Sharitha McKenzie of Portland will compete for the national title on March 23. The winner of the Miss USA crown competes in the Miss Universe pageant later this year.
The 2007 Miss USA Pageant airs live on NBC from 9 to 11 p.m. this weekend, on Friday, March 23.

Leilani Jones is the new Miss Washington USA 2007. The 24-year-old was born in New Jersey, but grew up in Tacoma, graduated from Bethel High School and is a student at Western Washington, where she majors in sociology and pharmacology.
Jones won the Miss Washington USA 2007 title on Nov. 12, 2006 in a pageant held in Seattle. It was her first try at the state title and outgoing titleholder Tiffany Doom of Woodinville crowned her Miss Washington USA 2007.
Jones, who works in a pharmacy while attending college, plans to become a pharmacist specializing in community awareness of pharmaceutical drugs and their effect on the community. While volunteering at various church activities, she still finds the time to volunteer for an organization called Sisters of Hope, a cancer support group and her local YMCA.

With a wide smile and bright eyes, Miss Oregon USA Sharitha McKenzie is proud to announce her personal platform, "Youth Athletics: Creating Avenues to Success."
McKenzie says she is very passionate about keeping children physically active and ensuring that they learn healthy eating habits at a young age so they can have a brighter future.
As an athlete, McKenzie says she learned to "always finish the race." It's a lesson that has carried her through four tries at the Miss Oregon USA title — she was first runner up in 2003, '04 and '06 – all the way to the national competition.
A Portland native, McKenzie is finishing her last year at the University of Oregon's School of Journalism and Communication. After earning her journalism degree, McKenzie hopes to pursue a career as a television reporter and eventually become an anchor for a major network.
Her smile is not the only big thing about her; she also has a big heart. In 1997 she became a founding member of the March of Dimes chain reaction youth council of Oregon, and involved in the National Association of Black Journalists, Self Enhancement, Inc., Bridge Builders' Youth Mentoring Program and the Les Femmes Debutante program.
The 24-year-old competed in more than 60 pageants before going for the big one, the Miss USA pageant.