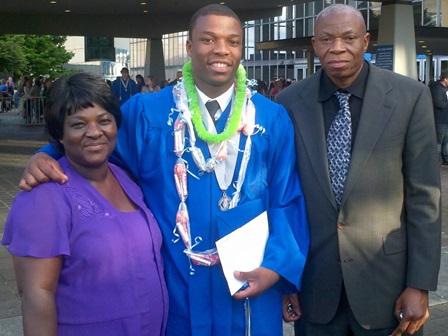 By Helen Silvis of The Skanner News
Published: 02 August 2013


At Gresham High School in 2011, Michael Muange played wide receiver and safety on the Varsity football team. Nobody could have guessed that such a strong, fast athlete had a heart condition that would take his life suddenly without warning.

Yet this week Muange's family is mourning the 20-year-old, who died suddenly of heart failure as he sat down to eat with friends.

A sophomore at Warner Pacific University, Muange hoped to build a career in business. He had been painting a house that day as part of his business assignments for a program called College Pro, says his sister Grace Muange Kambumba.

Michael was playful and fun to be around," she says. "He was funny and encouraging. And he had a lot of friends. He knew how to make people feel good about themselves. That's why they wanted to be around him.

"Michael had a strong faith and he kept his word," she says.

A nurse, Grace explains how and why her family lost their beloved son and brother so suddenly last Tuesday evening.

"He gathered other guys to work on the business, including his brother Simon and two friends," she said. "Simon came home, but Michael's friend's parents wanted to take them to eat."

At the restaurant, Michael barely had time to take a sip of water before he slumped over, she said. His companions performed CPR and Michael briefly started breathing again, but gasped for air and shook so hard they feared he was having a seizure. Paramedics rushed Michael to Adventist Hospital, but it was too late to save him.

"Every time his heart beat, it would pinch his left coronary artery," Grace said.

The shaking was not a seizure but caused by ventricular tachycardia, a problem that might have been reversed if the restaurant had had a defibrillator.

"I think every public space should have a defibrillator," she says.

While not common, the death of young athletes from heart abnormalities is a known problem. Immediate use of a defibrillator can save the person's life.

Businesses of 50,000 square-feet, or more, where 25 or more people congregate, also are required to have defibrillators.
A test called an echocardiogram can detect heart problems but it is not offered routinely.

Michael's father Pastor Simon Muange, came to the United States in 1995 after working with missionaries in Congo. The rest of the family left Kinshasa to join him in 1999. Despite the culture shock of moving to America from Africa, the family settled in Portland and quickly learned English. Their first languages were Lingala and French.

A fund has been created to help the Muange family pay for the funeral. You can contribute directly to the family or at any Wells Fargo bank. Tell the cashier you want to contribute to Michael Ndanga Muange donation fund. Wells Fargo bank account number: 511500507 5586971839