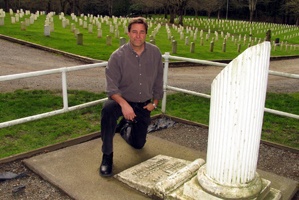 Journalist and author Jack Hamann kneels
next to a grave in Discovery Park's  military
graveyard, where his investigation into the
wrongful court martial of 43 Black soldiers during
World War II in Seattle began nearly 20 years
ago. Hamann is being honored as a
Horace Mann Award recipient later this month.

The news tip that changed Jack Hamann's life came from a rather mundane assignment.
It was 20 years ago and Hamann, then a reporter for KING 5 TV, was covering a story on the expansion of a sewage treatment plant in Discovery Park when a park employee approached him with the sort of tip many journalists would dismiss: check out a little military graveyard, the employee told Hamann, and you'll find a story there.
Little did Hamann know that this tip would lead to the biggest investigative story of his life – and to the eventual clearing of 28 African American soldiers wrongly convicted by the U.S. government for lynching an Italian prisoner of war during World War II.
The case began in 1944, right here in Seattle, when 43 African American soldiers were accused of rioting and three were charged with the lynching murder of Private Guglielmo Olivotto on a military obstacle course at Fort Lawton, which was located just north of downtown Seattle, in the area now called Discovery Park.
"I was totally stunned because I've lived in Seattle for a very long time and didn't think of or know Seattle of being a place where there was a history of lynching. I had no idea there were ever prisoners of war in Seattle, but most shocking was that the suspects apparently were African American and I have never in my life heard of Black men being accused of lynching," Hamann said.
For years Hamann, 52, thought about the case.
"I thought, 'How could such a large trial go unnoticed?' Something is wrong here," Hamann said. "I kept thinking this just doesn't make sense, no one could ever find another case in the history of the United States where Black men had stood trial for the alleged lynching for anybody, White or Black."
Eventually, after years of researching the case, Hamann managed to locate four of the defendants and two of the defense attorneys, one of whom was living in Bellevue.
Then, in 2001, after the youngest of his two children left for college, Hamann and his wife, Leslie, looked at the possibility of writing a book. To do it, they would have to do more research, including a month-long trip across the United States to cities like Chicago and Detroit and to small towns in the Deep South, to the defendants' homelands to talk to whomever they could about the case. At the U.S. National Archives in College Park, Md., Leslie found a report, which became the basis of Hamann's book, "On American Soil: How Justice Became a Casualty of WWII," that said the Army knew the African American men were innocent even before they went on trial.
"These men rarely had a constituency. They were from very poor environments. Many of their families members had no idea what had happened to them," Hamann said.
The soldiers had people lobbying for them — the NAACP Legal Fund and Thurgood Marshall, who later became a Supreme Court justice, wrote letters to the Army complaining about the trial — but it was the 1940s and people didn't demand things from Congress like they do today, Hamann said. "Even though it was all over the newspapers, including The New York Times, nothing much came of it."
Hamann's story, however, even though it was written six decades after the fact, got the attention of some influential people.
After reading "On American Soil," Rep. Jim McDermott, D-Seattle, introduced a bill in Congress that would reopen the trial. McDermott then urged Rep. Duncan Hunter, a Republican from San Diego and chairman of the House Armed Services Committee to reexamine the convictions. As a direct result of Hamann's book, the Pentagon has reviewed the convictions of the African American soldiers and has cleared 28 of them. Today, of the 43 original defendants, only two are still alive.
Hamann said his book is the "story of people and how they deal with the kind of crisis" he couldn't even imagine going through.
"Here are these guys, they know they didn't kill anybody, they certainly know they didn't lynch anyone and they certainly know a Black man's not gonna lynch somebody, especially back in 1944," Hamann said. "They were the scapegoats; there were the convenient ones, they didn't have anyone backing them, there were obvious signs it was somebody else who did this but the Army just blew right past them … the power and the weight of the United States military was coming down on them."
This past summer, Hamann received a call from the Pentagon saying that the convictions will be overturned and justice done for the men and their surviving families.
Hamann estimates there are still about 15 to 20 families he and the Pentagon have been unable to find who may be eligible for benefits.
"I hope this becomes part of the discussion in more classrooms and churches because this is a moral issue. What lessons were learned from this?" Hamann said. "It was actually the churches that first wrote to President Roosevelt and said 'You're wrong, something went wrong here.' They turned out to be right, but never knew that in their lifetime. Someone had to stand up for these men and their voices just weren't heard when they should have been."
Hamann recently found out that he is one of three Horace Mann Award recipients to be honored March 29 in the Crystal Ballroom at the Washington Athletic Club in Seattle. Presented by Antioch University, the award honors those who have won significant victories for humanity through their work or volunteerism.
At the awards ceremony, Hamann will give a voice to those who weren't heard "when they should have been," by reading letters written in 1944 by people trying to tell the president that something was wrong, including one from a mother of one of the defendants that pointed out what was wrong with the trial – a letter than went unanswered and unnoticed, until now.

ABOUT THE AUTHOR
Name: Jack Hamann
Profession: Journalist and Author of "On American Soil: How Justice Became a Casualty of WWII." He has won numerous journalism honors, including 10 regional Emmy awards, and is a former correspondent and documentary producer for CNN and PBS.
Family: Married to Leslie Hamann. The couple has two grown children, who both graduated from Garfield High.
Hometown: Originally from a rural town in southern California, Hamann and his wife moved to Seattle in 1981 after graduating from the University of Oregon School of Law.
Education: Bachelor's of arts degree in economics from University of California, Los Angeles and law degree from University of Oregon.
Coach Hamann: A youth sports coach for almost 30 years, Hamann is passionate about the students he coaches. "The kids are amazing, you get so much out of it. In our community now, so few kids really get challenged the way that sports can challenge them," Hamann said.
He has spent the past 10 years as an assistant girls' volleyball coach along side his wife, Leslie, who has been the head volleyball coach at Garfield High School for eight years.
"On American Soil": The book is available at local bookstores and online, in hardcover for $24.95, published by Algonquin Books. The University of Washington Press has published a paperback version, which will be out next week. The Hamanns recently finished a documentary, which aired on Channel 9 in Seattle, about women's sports, and Jack Hamann is researching another book. For more information, visit www.jackhamann.com.