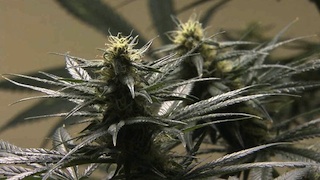 After more than 12 hours of debate, the bill garnered the 50 votes it needed to pass in the House of Representatives. Forty-six lawmakers voted against the bill. The country's senate is expected to take up the measure in October.

President Jose Mujica has said he backs the bill, which would allow marijuana to be sold in pharmacies and create a registry of those who buy it. Only those 18 and older would be allowed to purchase the drug.

"If we legalize it, we think that we will spoil the market (for drug traffickers) because we are going to sell it for cheaper than it is sold on the black market," he said. "And we are going to have people identified."

Conservative critics of the measure have said it promotes drug addiction and have suggested that Mujica's comments were uninformed.

Supporters of the measure, including the Broad Front coalition of left-wing political parties, have said it will fight criminal drug trafficking and marks a turning point and could influence other Latin American nations to take a similar approach.

"This implies the materialization of a new paradigm in terms of drug policies," said Lisa Sanchez, director for Latin America of Transform Drug Policy Foundation. "Uruguay will be the first country to establish effective state controls on the production, processing, distribution, storage and sale of marijuana, abandoning the prohibitionism and the punitive strategies. It is a turning point."

A letter sent by Mujica's government to lawmakers last year presented the bill.

The goal, according to the letter, is to create a government-run market that would "contribute to the reduction of risks and potential dangers that people who use marijuana for recreation or medical reasons face."

Marijuana is the most commonly used illegal substance in Uruguay, and drug traffickers net $30 million to $40 million annually from the black market, the government has said.

"Something I can say with certainty is that drug consumption is going to continue ... and we can't just keep on looking the other way," said Dario Perez, a Uruguayan legislator.

Marijuana use is legal in Uruguay, but production and sale of the drug is not.

Supporters of the country's legalization measure call that a paradox.

"The consumption of marijuana has been allowed for 40 years, but it can only be accessed through the narcos, and requires the commission of a crime, in addition to the exposure to other drugs," the Broad Front said in a statement on its website. "We have created a great business for drug trafficking, and that is what we want to start to fight."

In recent years, legalization measures have gained growing traction among some Latin America leaders amid rising violence many tie to the drug war.

But drug legalization still has fierce critics. Obama administration officials have repeatedly stressed their opposition to such proposals when they've been floated in other countries.

Last year, John Walters, who directed the White House Office of National Drug Control Policy from 2001 to 2009, told CNN that decriminalization is "utterly self-defeating" and would cause more crime.

Using military force to fight cartels doesn't work, he argues, but legalization would.

"With this, we will avoid the violence," Fox told CNN's Wolf Blitzer in May. "We will control the criminals and reduce their income, and at the same time, it would become a transparent, accountable business in the hands of businessmen."