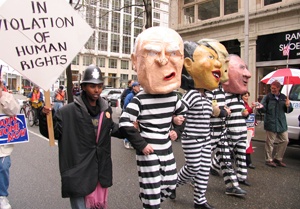 "Human Right" police officer Alice Kungu, escorts four prisoners through the streets of Seattle during an anti-war protest on March 19, marking the fourth anniversary of the start of the Iraq War.  Thousands of people marched in Seattle and in Portland this week to protest the war and to call for a complete withdrawal of troops from Iraq. The protestors in both cities joined hundreds of thousands of anti-war demonstrators who marched in cities throughout the world on March 18 and 19 to protest the America's continuing involvement and support of military action in Iraq, as well as the Bush Administration's recent threats against Iran.