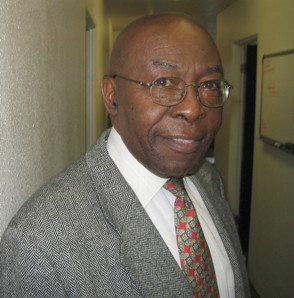 Henry Clay Miggins (known by all as Hank), passed away on July 18, 2013.  Hank was born to Nathan Miggins and Hattie Mae Dennis on Nov. 20, 1934, in Canton Miss. Hank touched many lives and achieved many accomplishments throughout his 78 years.

Please join his family in celebrating Hank's life at a memorial service and reception being held at the Eagle Lodge #3426 on Aug. 5, at 3 p.m., 7711 N. Exeter Ave. (at North Lombard), in Portland.  He will be buried with full Military Honors at The Willamette National Cemetery on Aug. 6 at 1 p.m.

He began his career in the United States Air force in 1954 as an accountant and auditor, retiring after serving 22 years.  Settling down in Spokane, Wa., he held the office of Vice President of Financial Affairs at Fort Wright College.  In 1981, Hank brought all of his energy and ideals to Portland, where he held the positions of Internal Auditor for Multnomah County, Deputy Multnomah County Auditor, Executive Assistant to the Chair of Multnomah County Commissioners, Interim County Chair for Multnomah County Commissioner, Interim Manager of Portland Exposition Center, Consultant, Legal Assistant to State Representative Michael Fahey Sr. and Animal Control Director.  In 2000, Hank returned to Spokane as the City Manager and Interim City Administrator.  In an attempt to retire, he returned to Portland, however, everyone who knew Hank knows that didn't happen.  He became a mortgage broker for Discover Mortgage for several years before finally retiring (again).

His retirement however, consisted of very little gardening. He continued to be a force in the community by contributing his time and talents to many organizations for which he served on the Board of Directors.  He never tired, especially if it was something that he believed in.  He always gave 150 percent, touching many lives through various organizations, including The Center for Airway Science, Oregon Assembly for Black Affairs, Project Pooch, Multco Credit Union, Board of Bar Governor's, Oregon State Bar, Rosemont School, Mainstream Youth Program Inc, Garlington Center, Federal Judicial Council, Multnomah County Citizens Budget Advisory Committee, Treasure for Blacks in Government, Oregon Adult Prison Authority, American Civil Liberties Union, Independent Police Review, Oregon Youth Prison Authority, Citizens Review Committee (CRC) and the Oregon Affiliate Representative for the ACLU, and let's not forget early on in Spokane he was the Master of Inland Empire Masonic Lodge #3, as well as being instrumental in the development of the Pine State Golf Club.

Hank worked hard and played just as hard, enjoying fishing, camping, boating, bowling, golf, traveling and much more.  He always reached out to help others with a kind word and an electric smile.  He will be greatly missed.

He is survived by his brothers, George Jones Jr. of Canton, MS and Clark Bailey of Portland, OR; his children: Henry Armstrong of St. Louis, MO, Cassandra D. Miggins of San Francisco, CA, Henry A. Miggins of Sacramento, CA, Theresa M. Dullea of Seattle, WA, Brenda L. Miggins-Vaughn of Portland, OR, Wesley J. Hardin of Spokane, WA and Celeste K. Maki of Spokane, WA, and numerous grandchildren and great-grandchildren, many, many close longtime friends and many others.