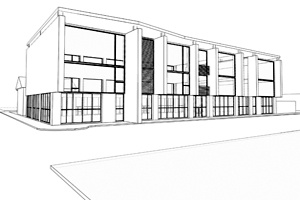 A new deal between Planned Parenthood and the Portland Development Commission will add at least 100 jobs to a rundown section of Martin Luther King Jr. Boulevard.
Beech Street Partners, LLC have released plans to build a three-story, 45,000-square-foot building at 3701, 3739 Martin Luther King Jr. Blvd., at the corner Beech Street. It's a stretch of MLK that is starting to see economic recovery, and PDC Project Manager Sara King says that, despite its nonprofit status, Planned Parenthood is a good fit with PDC's economic development model.
"We haven't helped a business that big on (MLK Boulevard)," she said.
Unlike other projects going up along MLK, Planned Parenthood has not requested monetary assistance from the PDC. And, although the project will not fall under PDC guidelines mandating construction wages and hiring practices, the developers have agreed to voluntarily comply with standards for the hiring of local and Minority/Women-owned businesses, green building, and transportation demand plan.
Planned Parenthood, a national nonprofit organization that offers reproductive rights and family planning services at affordable rates, plans to move their regional headquarters from 3231 S.E. 50th Ave. to the new MLK site. Planned Parenthood CEO David Greenberger said they would keep a presence in Southeast Portland, but plan to close a nearby clinic at 3531 N.E. 15th Ave.
The new site will employ about 100 people at first, with another 40 positions opening up in the near future.
Nancy Bennett, vice president of public affairs for Planned Parenthood says the nonprofit's current headquarters in Southeast Portland "has outlived its usefulness."
She added that the new location on MLK and Beech would expand reproductive health services in inner Northeast Portland and streamline Planned Parenthood's administrative services.
King, with the PDC, said she looked at several other private businesses and nonprofit agencies for the project, but that Planned Parenthood offered the highest number of good-paying jobs.
The pay for a majority of employees will also be at a level considered to be at or above "family wages." Greenberger said one third of employees would make $20,000 to $28,000 a year; one third will make between $29,000 and $47,000 a year; and another third will make $47,000 to $97,000 a year. Greenberger said they are working on ways to increase recruitment in surrounding neighborhoods.
And with an infusion of 140 employees, King anticipates that nearby businesses such as restaurants, dry cleaners and drug stores will see an increase in their business. The proposed facility would also provide about 15,000 square feet of ground floor space for retail businesses.

Those working with women in need of reproductive health services – including birth control, emergency contraception, screenings for sexually transmitted diseases, and abortion services, among many others – say young women in Northeast Portland need an easily accessible clinic.
"Moving to MLK would bring (Planned Parenthood's services) closer to the women who are most in need," said Emma Allen, an organizer working with the Direct Action Reproductive Rights Coalition, a newly formed grassroots organization working to ensure safe access to reproductive services. "It's more than a reproductive rights issue, it's a health care issue."
Allen said that, when it comes to women's reproductive health, it's important for clinics to be in convenient, easily accessible areas. The new facility would be minutes from Portland Community College's Cascade Campus and Jefferson High School.
Unlike many health clinics, Planned Parenthood does offer abortion services. Bennett says abortion services made up about 1 percent of the clients at the clinic on Northeast 15th Avenue. She said she isn't aware of any organized opposition to the new clinic, but said several individuals from Beaverton did testify at a March 14 PDC meeting against the organization's plans. Greenberger said these individuals opposed abortion, Planned Parenthood and birth control.
"People from this community were asking why they should come in and question (a relocation that doesn't affect them)," Bennett said of the Beaverton group.
She added that Planned Parenthood is eager to discuss any concerns community members might have.
Having the new clinic on a major bus route will help those who have experienced domestic violence, said Galadrial Mozee, director of Healing Roots Center, a domestic violence center for African and African American women and children.
Mozee said there is a need for culturally sensitive services, but that the services provided at Planned Parenthood are needed by women of all races and ethnicities.
"The color of my skin doesn't change the services I need," she said.
This is a sentiment echoed by Greenberger. He said the nonprofit's leaders took many factors — including the number of women of reproductive age in the area, economics and the need for women who are sexually active but do not wish to become pregnant and who need to be tested for sexually transmitted diseases – into account when deciding to move their headquarters to inner Northeast.
"There is an epidemic of STDs that does not know any (cultural, ethnic or economic) boundaries," Greenberger said.
Treasure Mackley, spokesperson for NARAL Pro-Choice America, said it's a good thing when a facility brings reproductive health care to an area, especially when it's affordable care.
The PDC Board of Commissioners is expected to vote on the development agreement in April, and the estimated 10-month construction period should begin in January 2008.