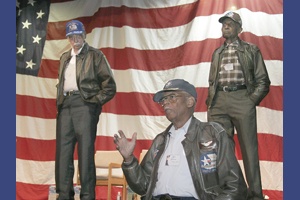 Veterans of the Tuskegee Airmen, the group of Black pilots that surmounted segregation and racism to become one of the most esteemed fighter groups in World War II, tell nail-biting stories of their war experiences during a presentation at Milwaukie High School on March 17. Pictured here, from left to right, are Alexander Jefferson, Richard Macon, and Bill Terry. On March 29, the Tuskegee Airmen will be awarded the Congressional Gold Medal of Honor, the highest civilian award given by the U. S. Congress, and the Black Press recently honored the Tuskegee Airmen with its Historic Military Service award (see related story, page 14.)