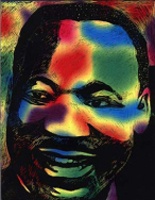 Larentae Sanders, a fifth-grader at Dunlap Elementary School, has won the grand prize at the elementary school level for his entry in the 2007 Black History Heroes Challenge.
More than 500 students participated in the challenge in honor of Dr. Martin Luther King, Jr. Day and Black History Month. Students from across the state were encouraged to submit creative works describing their black history hero. The Seattle SuperSonics and the Museum of History and Industry sponsored the contest.
Larentae was recognized at the KeyArena center court on Feb. 26 at the Seattle Sonics vs. Portland Trailblazers game. He also watched the game in a suite with his family and teacher; won an autographed Sonics jersey and miniature basketball; and received a family pass to MOHAI and four Sonics tickets to an upcoming game. Larentae's artwork is displayed on the Sonics Web site. His art teacher is Donna Amira. 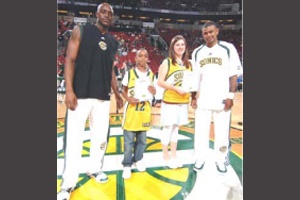