Listening to Willie Mae Hart talk about her life, and the life of her ancestors, is like opening a book you can't put down.
A few weeks shy of her 91st birthday, Willie Mae's memory is as sharp as any 20-year-old's and her story has all the makings of a classic novel. 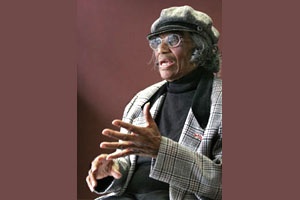 First, there are the characters: great-grandmother Sarah Reid Moseley was born a slave, experienced the terror of the Civil War, raised 13 children and lived more than 100 years before passing her legacy on to Willie Mae, the family historian. Another great-grandmother, "Grandma Martha," was White, of Irish descent, and her family — including her own identical twin sister — disowned her after Martha married a Black man
Then there are the historical chapters: When John F. Kennedy ran for president, Willie Mae and her friend, Beatrice Mott-Reed, hosted a picnic for the senator at Jansen Beach, to give Portland's African American voters a chance to speak to the senator and share their views. Willie Mae remembers JFK as a very laidback man, who propped himself up in the grass on his elbows to drink a Coca Cola, and talked to the people as if he had all the time in the world.
And every good novel needs a climax: When Willie Mae refused to raise a Black son in the Deep South, she left everything and everyone she knew and headed to the Pacific Northwest, where she became one of Portland's hardest-working civil rights leaders – lobbying the state legislature to give Oregon's African Americans full rights in the late 1940s and founding the first Council of Negro Women chapter in the Pacific Northwest.
Willie Mae brushes off the notion that she's anything special; crediting nearly everything she's accomplished to the grace of her Lord. But there's still work to do, Willie Mae says, and future generations of Black youth — or as this great-great-grandmother likes to say, "people who look like me" — must learn from the past, remember their history and work together if equality is to be achieved.
"Everyone thinks that we've arrived, but we haven't," Willie Mae says of the modern-day civil rights movement. "People need to work together … they can't do it alone."
And, as great-grandmother Sarah once told Willie Mae, "forgive but don't forget."
It's a motto that one group of Portland women has taken to heart.

The Department of Women's Studies at Portland State University is spearheading a project called "Portland's Walk of the Heroines," to honor local women's stories with community space, a stage for events, artwork, gardens and a "naming wall" with room for 1,350 names.
The project's coordinators hope to use two of these "naming panels" to specifically honor Portland's African American women who were or have been active in civil rights for at least 20 years – women like Glady McCoy, the first Black woman to win an elected office in Portland; Ellen Torrence Law, the first Black high school principal in Portland; Beatrice Morrow Cannady, who founded the first NAACP chapters in Washington and Oregon and who later helped get African American history courses into Portland's high schools; and, of course, Willie Mae Hart.
The coordinating committee includes Johanna Brenner, head of PSU's women's studies department; Evie Crowell, a tireless advocate for racial justice and civil liberties; Aletha Chavis; and Chris Poole-Jones. For more information on the Walk of the Heroines, to nominate someone for the "naming wall" or to donate to the cause, visit www.who.pdx.edu, or call 503-725-8188.