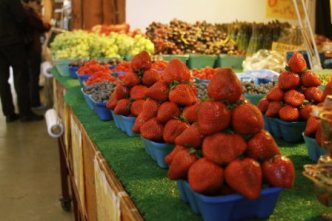 Such is the philosophy behind the growing movement of public produce.

Seattle city officials are about to break ground this summer for what they are calling America's first public food oasis. In a city where over 2,000 people are on a waiting list for a community garden plot, municipal leaders are seeking ways to bring more fresh, locally grown produce to the public.

So city officials came up with an idea for a food forest. They will plant a seven-acre public park with a variety of fruits, vegetables, and nuts that will rival any produce market. The menu of foods includes yuzu citrus, guava, honeyberries, and persimmon; standard fruits like apples, pears, raspberries and blueberries; nut trees popping with walnuts and chestnuts; and a variety of culinary herbs.

Years before Seattle cultivated their idea for a food forest, city planners in Provo, Utah, have been planting public crops outside City Hall. Faced with a limited maintenance budget, city officials decided they couldn't afford to plant and maintain the planters that welcomed citizens to City Hall. So city planners decided they would plant the grounds themselves. Only they chose pumpkins, cucumbers, melons, beets, tomatoes and potatoes as their plants. Their philosophy is simple: come to City Hall to pay your parking ticket, leave with a fresh, vine ripened tomato.

In cities throughout the world, citizens are facing rising costs for fresh produce and declining health from the Western diet, characterized by energy dense, nutrient poor fast foods. It is now cheaper to gorge oneself on Big Macs and Whoppers than it is zucchini and tomatoes.

In case you haven't heard, instances of obesity and type 2 diabetes have skyrocketed throughout Europe, North America, and Asia, paralleling the prevalence of prepackaged, processed foods in our diet. Just two decades ago, not a single state in America reported a prevalence of obesity greater than 15 percent of its adult population. Today, not a single state can make that claim. According to the United States' Centers for Disease Control and Prevention (CDC), one in three Americans are obese today. And only 25 percent of adults consume the recommended five servings of fruits and vegetables.

Our children's health is at stake, too. The CDC also reports that in many communities, half of the pediatric diabetes cases are type 2 (a disease stemming from a poor diet). Not too long ago, the total number of pediatric type 2 diabetes cases was nil.

So what does the CDC recommend to halt our plummeting health? More exercise, fruits and vegetables. It's that simple. By making fresh, free produce as plentiful and accessible as cheap fast food, we can get healthy again. And communities across America are digging in to do just that.

Public produce is not only taking root throughout America, but in Canada as well. Kamloops, British Columbia instituted their first public produce garden smack in the middle of downtown along the bustling Victoria Street. It was a huge success, and they've relocated to a bigger plot this season. In Calgary, the Forestry Department is planting orchards in neighborhood parks as part of a strategy to bring fresh fruit to neighborhood kids and families. Todmorden, West Yorkshire in the U.K. infuses all its public spaces -- parks and town squares, sidewalks and street medians, parking lots and even graveyards -- with fruits and vegetables, free to all.

But is providing fresh free produce to the people the role of local government? As long as municipal policymakers strive to reduce social inequity and increase the quality of life for their citizens, I think it is. Access to healthy, low cost food helps assure the health, safety, and welfare of citizens every bit as much as other services city governments provide.

Today, food plays a significant role in the health and wealth of communities. One in four San Franciscans cannot afford all the food they need, according to the San Francisco Food Bank. Former Portland Mayor Sam Adams noted that his city has one of the highest populations of hungry and malnourished citizens in the United States. Chicago's Planning Department enacted a local food policy "Eat Well, Live Healthy," to help bolster the diet and food education of Chicagoans.

These cities aren't waiting for programs and policies from the federal government. They need action now; and City Hall acts faster than Capitol Hill. Besides, the most transformative seeds of change must first be sown at home.

"Okay," you say, "But what if someone comes and picks all the ripe tomatoes? Or the pears?"

That could very well happen. And if it does, I'd say you have a successful public produce garden.