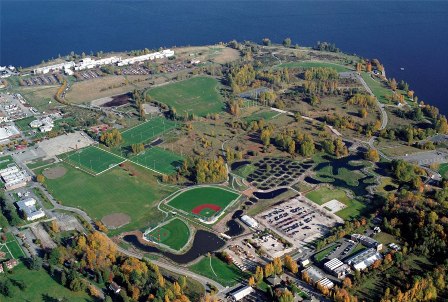 Public-comment period has been extended to July 26 for comments on the cleanup of Magnuson Park radioactive contamination.

The extension was requested by state Rep. Gerry Pollet and his citizens' group, Heart of America Northwest.

Comments on the contamination and cleanup may be sent to:

The proposed plan is available for review here.

Pollet says significant questions have been raised about the levels of radioactivity which would remain in park soils and about the lack of investigation of Lake Washington sediments and groundwater.

He also says the Washington State Department of Ecology says it is planning a public meeting to answer questions and take public comment in July.

High levels of radioactive contamination were identified in the park in 2010, but the public was not notified of the contamination. In March, the Navy informed local elected officials that it planned to start a cleanup using an expedited process which bypasses normal public review and comment.

The Department of Ecology, which has oversight authority for the cleanup, was not informed until mid-April of a cleanup which the Navy planned to start in May.

The extension of the comment period, which was due to close on June 27, comes after dozens of citizens, Heart of America Northwest and Pollet requested more time for public comments due to a lack of access to documents needed to inform comments as required by law.

Pollet said that the Navy is proposing to leave contamination in soil and storm drains at levels hundreds of times higher than allowed under the state's applicable cleanup standard for carcinogens. He said that the public was left in the dark about the contamination for three years before being notified this spring, directly before the flawed cleanup work plan was set to begin.

The Navy has not yet responded to an FOIA request for many records which are needed for a review of the proposal. Seattle Parks has responded that it needs until July 10 to complete a response for records.

Although the comment period was extended, the Navy still intends to "begin mobilizing to the site" the week of July 8, despite not having investigated whether the contamination has reached Lake Washington sediments or groundwater – major concerns for the public.  "Extending the public-comments period and holding a proper public meeting is a promising development that allows more time for park users and local residents to get their questions answered and make their concerns known," Pollet said. "But the Navy, the Department of Ecology, and Seattle Parks must not stop there. The failure to provide a review for residents to consider of health impacts from the contamination which the Navy proposes to leave behind is just one of many shortcomings of this project that still needs to be addressed."

Despite the comment-period extension, the Navy says it is still planning to commence field activity on July 8, three weeks before the comment period ends. That timeline is unprecedented and raises serious questions on whether the Navy has any intention of adjusting its cleanup plan based on the comments. \\"While the news today that the comment period has been extended gives some reason for optimism, it is somewhat countered by the reality that the Navy has not shown much interest in truly meaningful public outreach and input consistent with our state's environmental laws and values from the start," Heart of America Northwest Legal Intern Ryan Strong said. "The decision to start the inadequate cleanup without the proper legal authority before comments are even closed reinforces that view."

Heart of America Northwest maintains that the Navy does not have the authority to proceed with an expedited process under federal law as it asserts, and that Seattle Parks and the Washington Department of Ecology must step in and take charge of the project under state law. That would apply more protective state standards to prevent additional cancers caused by leftover contamination and provide a much more meaningful public-involvement process consistent with the values of government transparency and accountability. To date, the improper arrangement continues, despite the Navy having issued statements that it recognizes that the state's cleanup law applies.

In 2009-2010, it was discovered that Magnuson Park has a serious radioactive-contamination problem stemming from its use as a Naval Air Station several decades ago. The contamination is in and around buildings 2, 12, and 27 on the northern side of the park, near the popular Arena Sports complex and the Magnuson Athletic Club – though all indications are that areas currently accessible to the public, including the playing surface in Arena Sports, are safe. Contaminants include radioactive radium, strontium, and cesium.