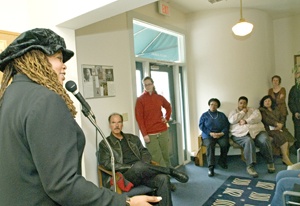 You wouldn't know it by the laidback atmosphere inside Bradley-Angle House's new Healing Roots Center, but this North Portland community center for Black women and children experiencing domestic violence is pretty revolutionary.
"There's nothing else like this in the country," says Healing Roots Program Director Galadriel Mozee. "We're unique."
Of course, being on the cutting edge is nothing new for Bradley-Angle House. The 32-year-old Portland nonprofit was the first domestic violence shelter on the West Coast, and recently made headlines for its new Allies for Hope program, which brings men into the campaign against domestic violence.
"At Bradley-Angle House, we believe it is time to reach out to all communities, because all communities have members experiencing abuse," says Kristan Knapp, development director for Bradley-Angle House about the new Healing Roots Center. "By working together, we hope to raise awareness and to create communities in which domestic abuse is not tolerated."
The new culturally specific Healing Roots Center, a collaboration of Bradley-Angle House, LifeWorks Northwest and Nappy Root Press, celebrated its grand opening on Saturday, March 3. The center is centrally located at 5432 N. Albina St., just south of Killingsworth Avenue.
Mozee says the center will act as a social service clearinghouse of sorts for African and African American families affected by domestic violence.
"When women come in, if they have children, our youth coordinator will take the children to talk one-on-one and we'll find out what the woman's most immediate needs are. That might be housing, finding a job, whatever she believes her most immediate needs are," Mozee says.
Additionally, the center has staff trained to talk to the children and help them cope with the stress of growing up in a domestic violence situation.
There are a variety of services available at the Healing Roots Center and all are free of charge.
On Thursday nights, from 6:30 to 8 p.m. there is a drop-in class for African and African American women experiencing domestic violence – now or in the past.
On Wednesdays, from 6:30 to 7:30 p.m. the center offers a beginning yoga class for this same clientele.
Other things like wellness classes, youth programs, parenting workshops and job preparation classes are also available at Healing Roots. Women and children can come by to work on the center's computers, do homework or just be in a safe place.
Mozee also encourages young African American and African teenagers who are in violent relationships to come to Healing Roots, and has been trying to get the word out to local high schools.
The center's drop-in hours are: 7 a.m. to noon on Mondays, 10 a.m. to 3 p.m. on Tuesdays, and 2 to 6 p.m. on Wednesdays.
Mozee says the center grew out of a variety of needs in the community and that it is especially important for Black women going through domestic violence to have culturally specific services.
"In the Black community there is a big belief in being community oriented," Mozee says.
When Black women are affected by domestic violence, they are much more likely to turn to family members or their church before bringing the police or government-funded social service workers into the fray.
"In the Black community, there is a real fear about what might happen to you if you go to the police … about what might happen to your children," Mozee says.
And for African immigrants, there are other cultural differences that must be respected.
Last November — one month after Said Biyad, a former member of Portland's Somali community known for being abusive, allegedly murdered his four children and seriously injured his wife in Kentucky — Mozee met with respected members of Portland's tight-knit African community to encourage more open communication.
"We know that there are less reported cases of domestic violence in the African communities here, but that doesn't mean there is less domestic violence," Mozee says. "That community has asked for our assistance … and we're here to support them."
For more information on Healing Roots, call 503-595-9591.