By Helen Silvis of The Skanner News
Published: 27 June 2013 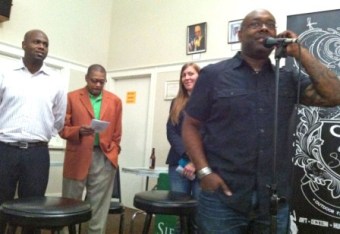 Billy Webbs Elks Lodge hosted the premiere of a new short film from Soul River productions, Wednesday evening. About 50 people turned out to see Conservation Consciousness Runs Deep," and hear from some of the people who made the project happen.

Chad Brown, CEO and creative director of Soul River, wrote and produced the film, which melds spoken word poetry and visual artistry to produce a beautiful and powerful call to action.

Unlike almost any other film you've ever seen that deals with conservation, this film will appeal to urban youth and youth of color. Brown and his co-producers hope to encourage more youth to look at conservation as a key element of their heritage. Brown himself was inspired by Matthew Henson, a dogged African American explorer who likely was the first person to reach the North Pole.

Brown has shown the film at King school in Northeast Portland, and now plans to take it into other schools. It's also going to travel to film festivals around the country.

Sharon Gary-Smith, executive director of the Mackenzie River Gathering Foundation was one of many audience members who said they were wowed by the film.

"How can we help you do more of this," she asked Brown. "This is inspiring."

A decorated Navy veteran, Brown went on to pursue a career as an artist and designed a clothing line for Rev. Run of Run DMC. He founded Soul River after discovering that spending time in the great outdoors was one of the best medicines for his post-traumatic stress disorder.  From then on Brown has dedicated his efforts to spreading the word to veterans, and also to urban youth, who deal with high stress levels in their everyday lives.

Other speakers talked about the healing that comes from spending time in nature, whether it's fly-fishing, working on conservation projects or learning how to survive in the wilderness.

Entrepreneur Paul Knauls Jr., shared his first experience catching a fish, and how much he wanted to keep that fish. His grandfather, however, told him he had to return it to the river, telling him, "Be good to the river and the river will be good to you."

Stephanie Puhl of the Freshwater Trust, talked about the importance of preserving the purity of our water systems.  Alex Chabert shared how his mother had introduced him to planting trees as a child. He became so hooked he was crew leader for Friends of Trees  in his early teens, and now is Vancouver Urban Forestry Commissioner.  And outdoor enthusiast and REI employee Tim Devlin talked about how much he loves working outdoors. When he was eight, he says, his uncle took him to work on the Appalachian trail. "My parents weren't happy about that. They thought I was going for a week. I was gone for over a month," he said. "It happens."